RSS
← XJR at Eskdalemuir
Regula Flies with the Eagles →

I had some success with my roof garden this year.

The honey suckle I inherited with the apartment appeared to get a new lease of life although it was competing for room on my Screaming Tree with the clematis which climbed a rope and attacked from another direction. 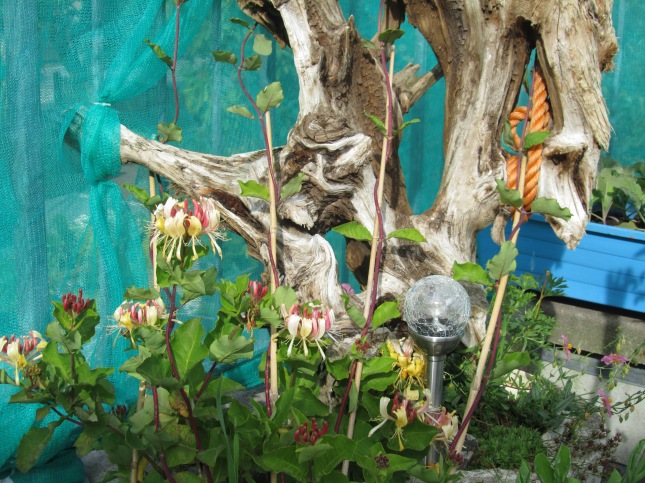 My sweat peas did well too but a cheeky family of sparrows delayed the first flowering when they pecked all the new buds out. 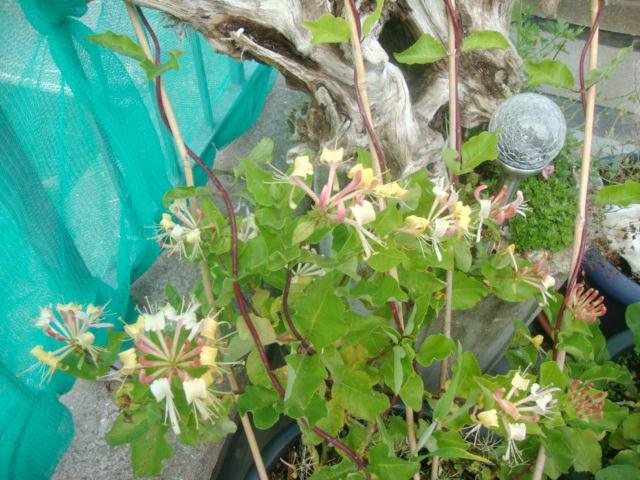 I will draw a veil over the vegetables. After a decent start they quickly went to seed and apart from a few carrots most were a waste of space. I think I’ll fill there pots with bedding plants next year. Even I can grow them.

My first rose of the season was almost my last one. My attempts to kill out the aphids almost did for my rose bush too and it was a touch and go for all of July and August. 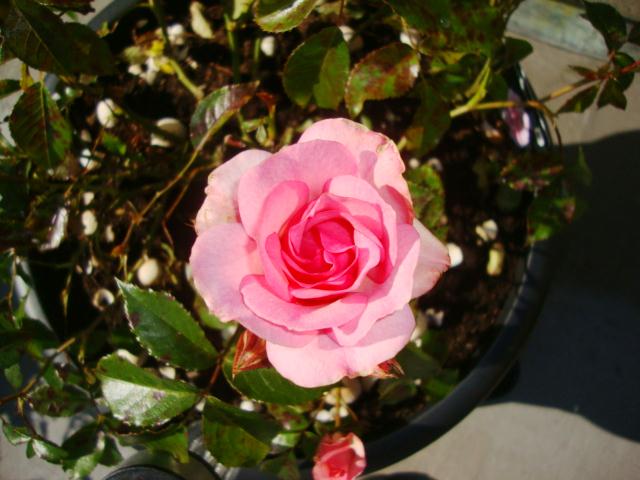 All the leaves and buds fell off leaving a dry looking twig and I put a half dozen cheap strawberry plants from Aldi in the pot beside it.

By September the rose had recovered and I have had several flowers but I do feel bad about almost killing it.

A small bonus is that I got a few nice strawberries.

The rockery in a pot did well. It was on a low table in amongst the hostas and everything in that corner flourished despite the torrential rain that flooded all the pots and washed the nutrients out of the soil. 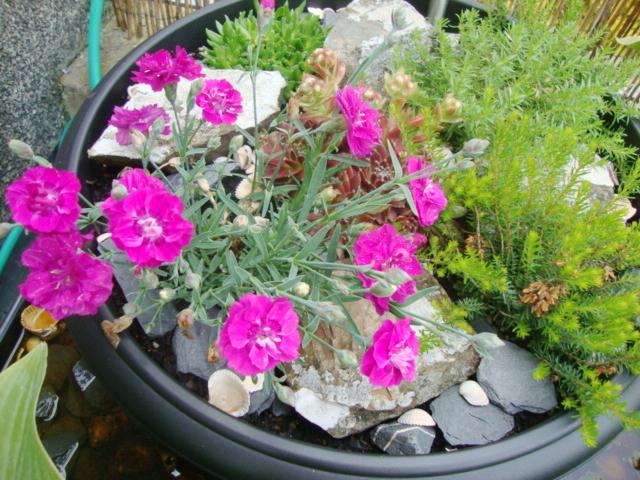 The sunflowers in the same area grew to a great height but in the last week or so they stopped shooting up and have flowered.

As for my lillies!  They started off as two soft looking plants I bought in flower last year for some instant colour. They lasted less than two weeks and were frozen into an ice cube in the winter when the frost got to them before I could lift the corms. 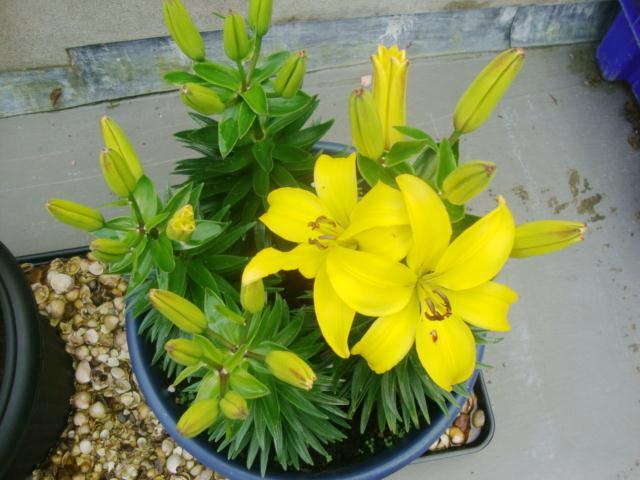 My instruction manual says I should put the corms in a cool dry place for the winter. What do they know? My two lillies had increased ten-fold and I was actually giving corms away when I rescued them in the spring!

The few shrubs I had in pots did well with only one fatalty. I’m reluctant to chuck it out because I had written my rose bush off at one stage and it recovered despite me. 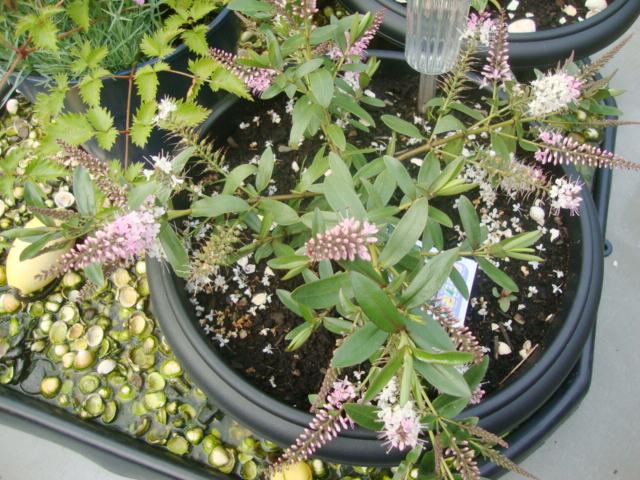 Last year was my first attempt at a roof garden and although I had mainly bedding plants the biggest threat was the high winds they were exposed to.

This year I put cane and netting windbreaks round the wrought iron perimeter fence and I think they have been a success but wind wasn’t the problem. No it was the torrential overnight rains. 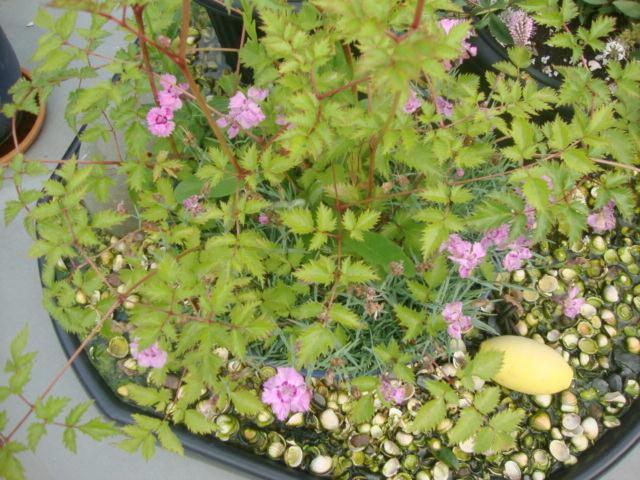 It’s 1st October today so it won’t be long before my blackbird and his friend the robin are back for the winter. I hang bird feeders from my screaming tree and they prove very popular with the birds that don’t head for warmer climes.

My first attempt at a roof garden and mostly I’m pleased with the results. The photos don’t do it justice and unfortunatly I’ve deleted most of the ones I had from mid-summer when my garden was at it’s best.

No worries – I’ve realised the Good Life it ain’t! Apart from the lettuce and a few cherry tomatos the veggies were a waste of space and next year I’ll be visiting my local Tesco when I want to make broth.

Oh yes – the Screaming Tree! My daughter and I rescued it from a lochside in the depths of a Galloway Forest –  smuggled it home in her jeep and somehow we managed to get it up on to the roof terrace. I festooned it with ropes and floats picked up on various beach-combing expeditions and a friend dubbed it the Screaming Tree. I took the hint and removed most of the decorations leaving me with what must be the best natural tree sculpture I’ve seen anywhere. So I’m biased – who cares?

← XJR at Eskdalemuir
Regula Flies with the Eagles →