I had taken my bedsit for four nights all told and decided to ride over the back roads to the port of Zadar on Friday to book my ferry to Italy in preparation for my Sunday night crossing. Yes I thought I might follow the advice I had been given by all and sundry and go home that way. 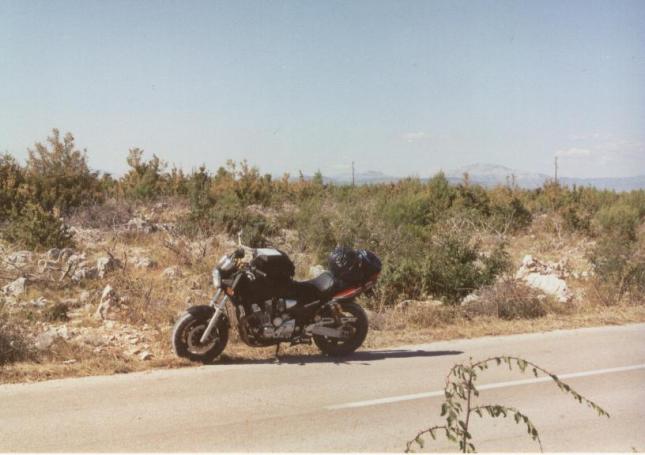 After booking my ferry I had a look at the coast road to see what all the fuss was about. Absolutely no problems. Granted it was a bit stop-go as with any tourist trail, only worse because apartment owners, mostly German, had every layby staked out as they tried to attract passing motorists to stay in their newly built houses.

Next I parked in the shade of some pine trees and went for my first dip in the clear waters of the Adriatic. Two beautiful girls wearing only miniscule thongs from a family group bathing next to me made me realise how much I was missing the comforts of home! When I couldn’t take any more I got back on the bike and rode down to Sibernik. It has a beautiful promenade, gorgeous girls, waterfront bars and cafes. I found I couldn’t chill out so I struggled out of town through the grid-locked traffic and headed for the hills again! 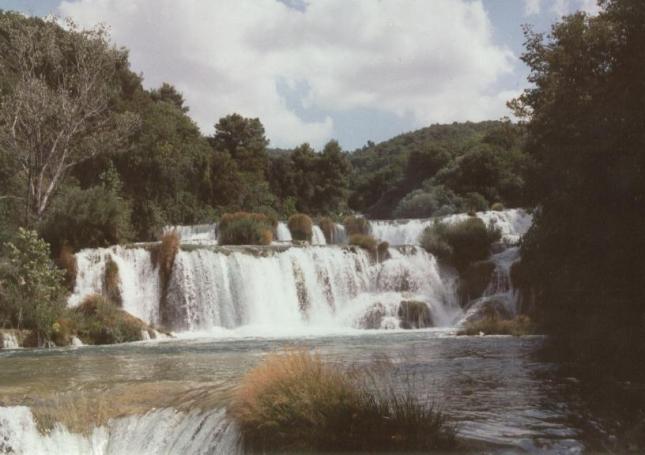 I approached the lakes from the west this time. Down past some dusty lime-stone quarries by the hill-top town of Drnis where I spotted barbed wire fences and watch-towers surrounding a group of nissen huts in the dense scrub. It could have been a prison camp, a munitions dump or even a mine field but with all the scull and crossbones signs on both sides of the road I wasn’t tempted to investigate further. Mindfull of the fate of the British plane-spotters in Greece I didn’t take pictures either. 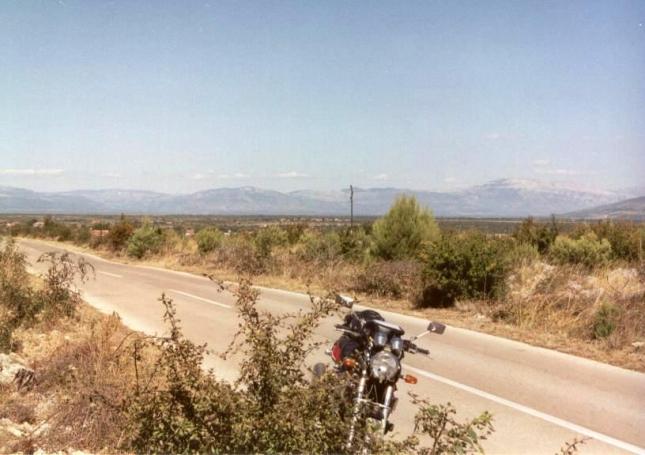 The upper lakes were fantastic! There was quite a variety of birds including heron, cormorant and duck plus many colourful smaller birds. Every kind of butterfly you could imagine fluttered about the lush trees and undergrowth near the water which was full of shoals of small fish darting this way and that in unison and possibly even big uns too for all I know. Best of all I had most of it to myself. I even found my own waterhole and went for a dip in the cool, clear fresh water.Magic! 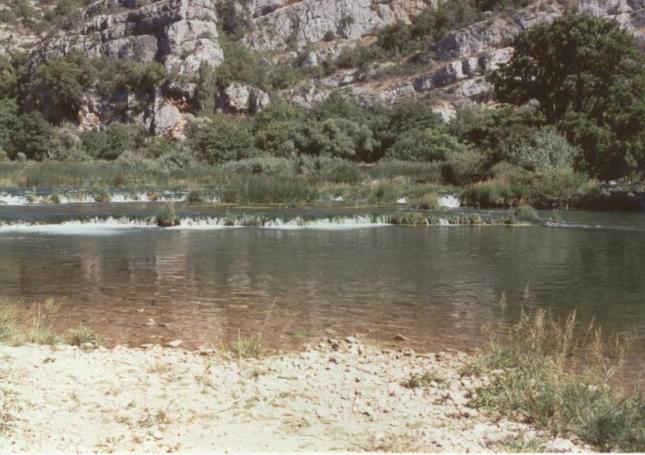 I think it was about then I realised I had missed lunch so it didn’t take much to persuade me to stop at a quiet restaurant terrace in the middle of nowhere with views down to the lakes. Their grilled trout tasted just like the rod-caught or ‘tickled’ brownies I remembered from my youth in the Scottish Borders. The only thing missing was the oatmeal dressing. 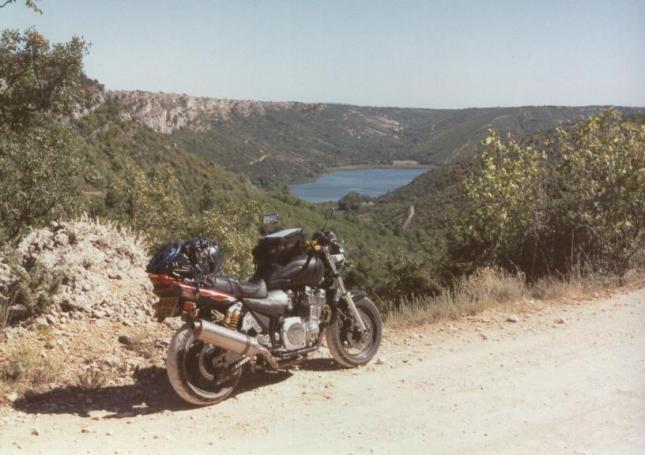 I washed my meal down with a cool beer and scrambled out of there up an old dirt road that was rough enough to have me worrying again about  my precious titanium exhaust but thankfully my exhaust and I emerged unscathed.

My favourite photos? It’s hard to choose my absolute favourite but this first one taken from the Sibernik road to the south comes close — 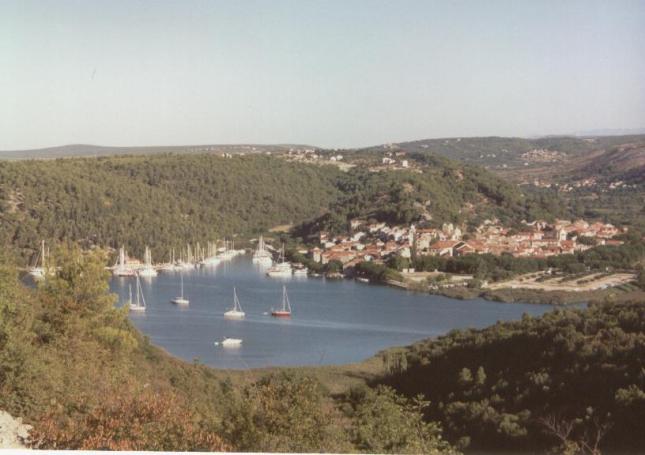 The bridge beyond the yachts is part of the new north/south motorway system which was being built while I was there in 2004. 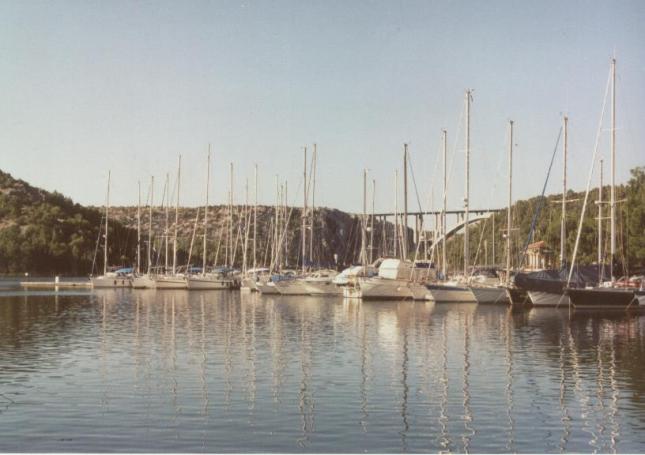 the bridge in this next photo is at the entrance to KrKra National Park and the official tourist boats sail under it. 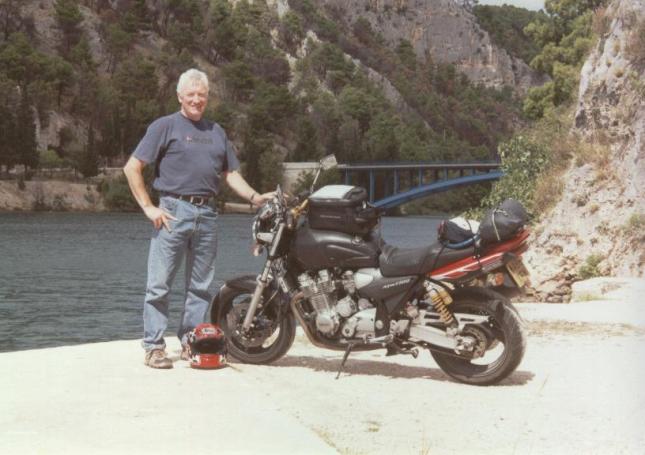 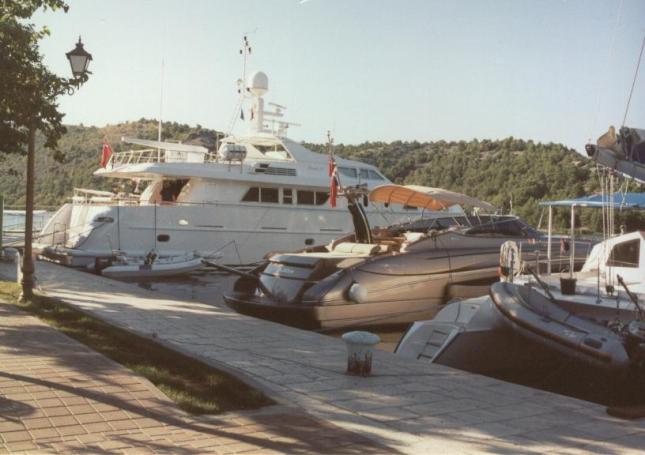 Another day ended with a few beers at a waterfront bar in Skradin and a sneaky night-cap from my ‘olive oil’ bottle before bed. I told you it can be thirsty work being a motorcycle tourist.