It was certainly Bank Holiday Monday again in northern Italy as the next stretch of road had very heavy traffic with a fair smattering of trucks from eastern Europe. Obli-Tablach was the dot on the map I was heading for and it turned out to be a busy holiday centre with quite a mix of Austrian, Italian and German visitors. I was running out of steam by this time and so was my wallet with the XJR averaging 38-40mpg over the fifteen hundred miles covered up to that point.

I found a hole in the wall to replenish my funds and a proper Italian ice-cream from the cafe across the road revived me enough to carry me over the border and into the Austrian Dolomites. I soon picked up a fantastic biking road that took me to the promising looking village of Maria Lugga.

This tiny village set in a beautiful valley is dominated by it’s massive church and I was very fortunate to find lodgings with Herr Imtal – Gastronome – Retired!

First impressions of his roadside guesthaus were misleading. When I parked and was led downstairs from the main entrance by this little old man I had visions of sleeping in some dark, dungeon type cellar. Imagine my surprise when he opened the door to a pleasant double complete with en-suite facilities and it’s own south-facing terrace looking out over hayricks in a peaceful valley with the majestic Italian Dolomites rising in the distance. I wanted to stay – and did for two nights.

The icing on the cake was to find that my terrace connected with a bar-cum-restaurant nex door and another plus was that Herr Imtal had me park my bike safely locked in his sun lounge on the side of the house.

I was soon showered, changed and over to the bar for a tall glass of Austria’s finest to enjoy as the sun set over the mountains to the south-west. It was even more magical when the moon rose between the two main peaks.

M-mmmm—– I must have had two glasses – but I do put in long days in the saddle. My face does get burned through that visor. Where’s the aftersun cream? 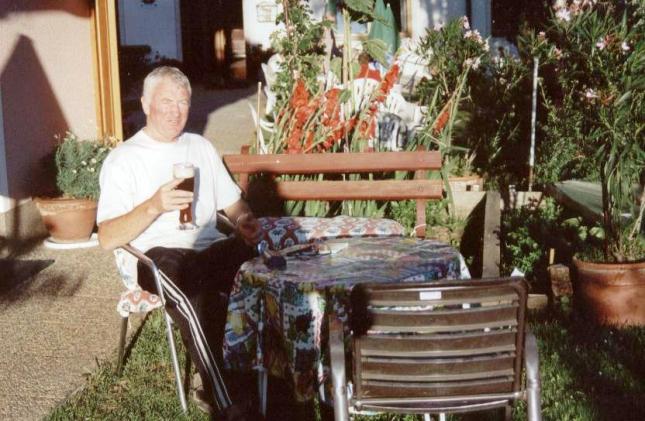 The following morning I sat down faced with a breakfast that would have fed a battalion and plowed through it as much as I dared. I didn’t really want to go up two sizes in my trouser fitting! Without my luggage for a day I was off down the valley and over to the Italian Dolomites to play. The roads were brilliant! Over, round and through the picturesque mountains. There were a few bikes about but the previous day must have been the end of the busy summer holiday period and judging by the massive logpiles by the back doors of all the houses, winter would be a long drawn out prospect. 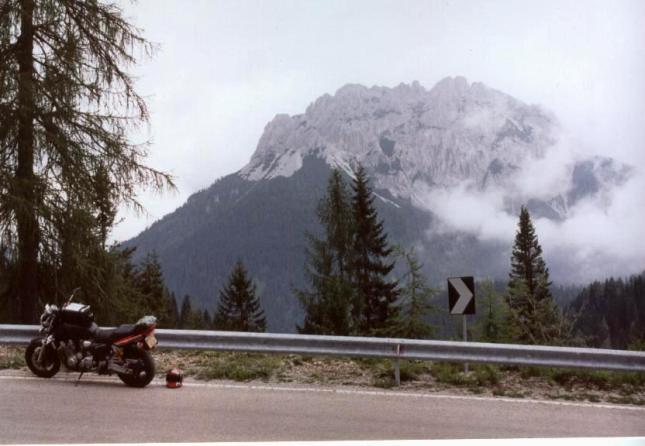 My route took me over the Plockenpass on the road to Tolmezzo. Not too high at 4500ft but the weather had changed and the top few hundred feet were shrouded in low cloud. Wet and miserable just like a bad day at home.

I was back in Maria Luggau in time to take a walk in the late sunshine by the river on the valley floor. The villagers were taking their last cut of grass from the communal fields round the village and the thought taking a few days into the mountains with my boots and rucksack was an appealing proposition.

I had a look round the churchyard when I was out as old graveyards facinate me. I notice that members of the Imtal family had been interred in that little burial ground since 1410 and probably before that! Considering our different backgrounds, aspirations and languages my host and I hit it off really well. As far as I could gather he had lived in the village all his life while I on the other hand had spent much of my life travelling. There was little doubt that we were both somewhat envious of the other’s lifestyle.

Road hazards Maria Luggau style – the children bring the cows home to be milked. The second cyclist doesn’t look too sure but I think she picked the wrong side because that cow is turning right and she has right of way!

The cow won! But the owner was fined for not fitting her with a bell.