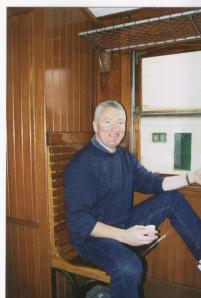 Back in ’02 during the formative years of the XJR Owner’s Club a fellow owner and steam train enthusiast (Borg) rode up from his home in London to spend a couple of nights with me in Shropshire where I was living at the time. We rode over the Berwyns to Bala and beyond to Portmadoc for our first look at their Steam Rail setup and were very impressed. Mostly manned by volunteers it was quite something.

We parked the bikes at the station and spent the rest of the day around the trains and rolling stock. We even took a ride by steam train up to Ffestiniog where the slate was mined that the railway had been built for in the first place. It carried the slate down to the harbour in Portmadoc from where it was shipped to London amongst other places. There was a time when the streets of London were said to be paved with gold – even for the welsh slate industry.

I remember cobbling a ditty together and sending it to my very young grandchildren at their home on the outskirts of London. It went something like this. 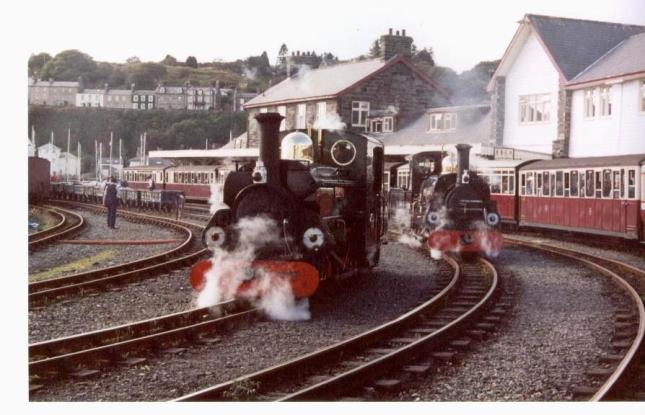 with slate from the quarries — 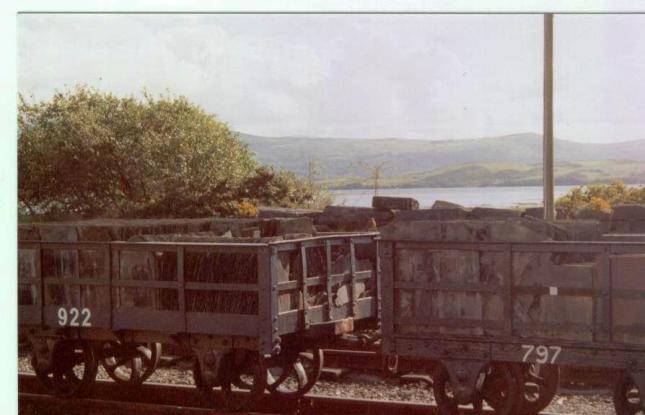 action from the workshops —

a bit of spit and polish — 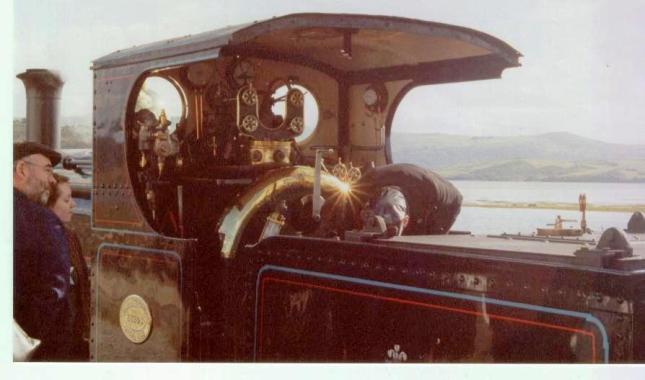 and a good push from the back —

the little steam train puffed off down the track —

While on the subject of Steam trains here two more photos borrowed from a friend. 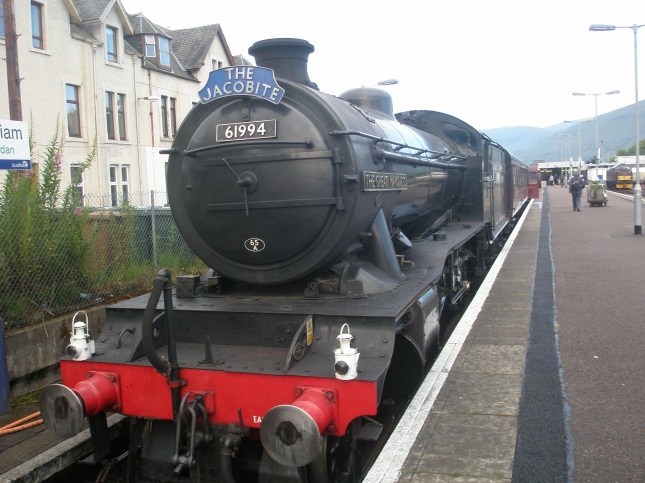 one of these days I’ll make this trip on the train but the road to Mallaig was built for bikers. 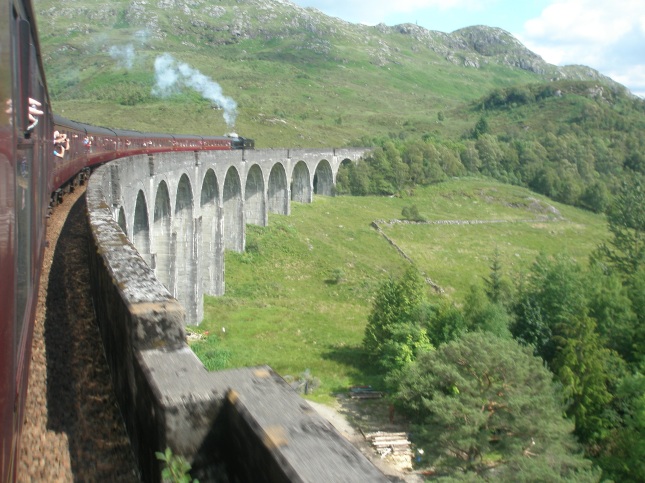 Confession — I used a touch of poetic licence with the opening photo at the top of the page. It was taken in a railway carriage but nowhere near Port Madoc. That pic was taken on the wooden train that runs between Palma and Soler on the island of Majorca 🙂

Posted by Don on December 21, 2011 in Uncategorized

I blame the Scottish weather! My thoughts are on warmer places. Mallorca can be ok this time of year so long as you carry a rain top or fleece. I’ve wandered around there quite a lot. My first trip was way back when my local pub in Dunblane organised a long weekend in Arenal. I will spare you the gory details – suffice to say much drink was spilled 🙂

I have clearer memories of another out-of-season trip I did on my own. I had the use of a friends apartment in Port de Pollenca in the north. It wasn’t long before I’d done all the local and semi-local walks including some interesting hills.

Time to explore further afield. The highest peak on the island was next – Puig Major —

It was quite a long walk in from the road on the north side and I came across an Ice Safe below the peak. Apparently it was put to good use prior to the invention of refrigerators and was still full of icy snow. It consisted of a deep hole quarried in the rock. In winter snow would be packed down the hole and covered with charcoal. In the summer it was just a matter of climbing up with your backpack or mule, cutting a few blocks of ice out and carting them back down the mountain where they would be put to good use to chill the San Miguel..

Once back at the road where I had left my hire car it was only a couple of clicks back to the Monastir de Lluc where I found a room with the monks. The room was basic but warm enough under the wool blankets and clean. Dinner in the main restaurant was ace with a big open log fire roaring up the stone chimney. I had hooked up with a young German architect also walking solo by this time and over dinner we hatched plans to hike out to the coast via the four hundred feet deep Torrent de Parais in the morning.

Transport was sorted when the only other guests at the monastry – two German girls with their own hire car offered to drop us at the head of the gorge in the morning and collect us from the beach later in the day. The deep gorge needs to be treated with respect. Once you are down there it would be very difficult to get out other than under your own steam. Some parts are narrow enough to have you squeeze through – others have ropes strung to help pull yourself over large boulders. A major concern is flash flooding as there is nowhere to hide from the torrent and the walls of the gorge are sheer rock. A couple of bits needed swimming through and it was a relief to see the girls waiting for us when we eventually emerged onto the beach.

Next step was to light a fire from the driftwood laying around and just chill out with a beer or two the girls had picked up on their way down.. My German friend just shucked off his clothes and walked into the sea naked. It’s sad that we shy Brits aren’t so keen to bare all in front of virtual strangers. I did envy him his freedom of expression. It was to be a few years later when needs must in Croatia before I found that liberating feeling.

The road back over the mountains was quite something. On one particulary steep section it was elevated and screwed round on itself a full three-sixty degrees to gain height to the next level.

Dinner in the Monastry restaurant was even better that second night and my German friend was sitting on the stone steps by the entrance in the morning holding his poorly head when I left. The House Red had been  particulary strong! Just the way the monks like it!

Unfortunately the photos I have to hand are mostly from a later trip.

This could be the cathedral on the coast by Palma —

The railway station in Palma next where the wooden train leaves to rattle up and over the mountains and down the other side to Port de Soller on the remote west coast not too far from where the Torrent de Parais reaches the sea.

An atmospheric ride – especially with me driving 🙂

I lie I was only the conductor 🙂

Was a time when I loved to splice the mainbrace 🙂 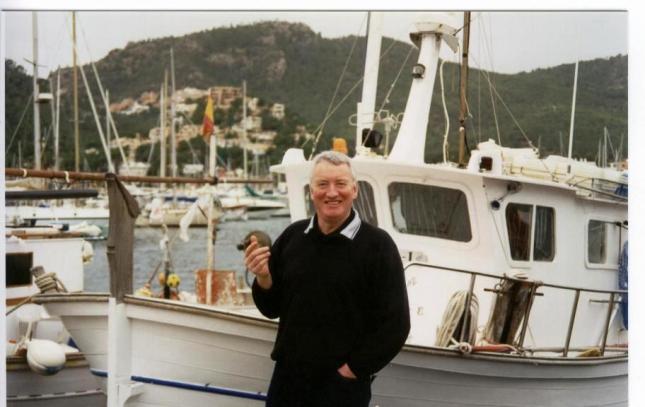 Sorry but that’s my lot. Considering how often I have been on Mallorca I don’t have many photos to show for it