I toook a gallop over the back roads to the workshops after lunch. And I mean back roads! Around here farmers treat them as part of their fields and the big 4 wheel drive tractors drag the soil onto the roads keeping things interesting. We did well catching a bit of sunshine for our ride on Sunday cos today took me back to wintry conditions.

I had a few bits of bodywork to take off to get at an electrical connection under the big tank of the Tenere but luckily I managed without having to take the fuel tank off altogether. It didn’t take long to sort the replacement  wiring out for the heated grips and I dallied awhile afterwards to catch up with events.

The new billet yokes for the Wes Cooley Special were being picked up this afternoon so there should be progress made on that bike soon. The big push was on completing a batch of petrol tanks for a Wayne Gardner Honda that’s being built by A.N.Other. The tanks had that dual filler system used by the Endurance Racers so it might have been a batch of Wayne’s Susuka Eight Hour bikes that are coming together. There was a new frame for the Honda sitting there to make sure the tanks fitted and it looked good.

You will just have to put up with pics of my Tenere covered in road dirt cos I didn’t take much in the way of photos in the shop today. 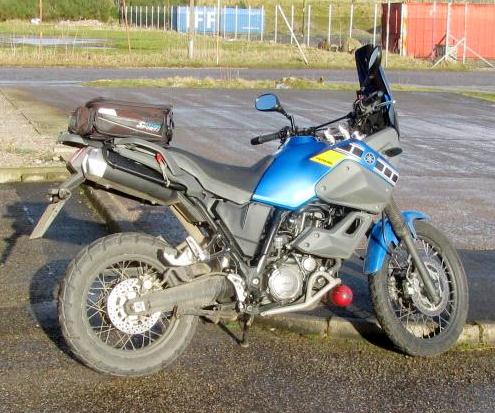 It’s early days I know but I’m really enjoying the Tenere this year and not only does the new 140 section rear tyre fill that enormous gap under the seat better than the OE 130 but it works better as well. Must remember to order a front tyre tomorrow cos it’s worn more than I thought. And a cush drive rubber as well when I’m in the ordering mood before the current one breaks up completely. Oh no! Rear brake pads too – that’s because I used to trail the rear brake into bends for the first 10000 miles on my Euro-tour in an effort to keep the ‘Lurch’ out of the ride when I accelerated out of corners. Rear wheel braking instead of engine braking helped to keep the top run of the chain tight ready for coming on the throttle early and a smoother transition to drive.

Subsequent mods I’ve made to the suspension mean I’ve got rid of the ‘Lurch’ effect and I don’t have to do this trail braking into bends any more so less wear on the pads and disc. A result! The next set of pads should last forever 🙂

And before anyone asks – she’s not on a bombing run! That little red cannister hung on the lower engine bars contains my toolkit. The original pouch clipped into the rear of the fuel tank and once you had taken it out it was almost impossible to fit it back in even if it did only contain a miserable selection of tools from Mr Yamaha.

Posted by Don on March 7, 2012 in Uncategorized