It was a day for playing dirty on the Tenere. My mates with their BMW1200GS and Vee-Stroms don’t like getting gravel under their wheels in any shape or form and if I want that sort of stuff I go off on my own mid-week.

The road runs down the side of Loch Doon where a township for 3000 servicemen was created during the war. A railway was also built on the hillside by the east bank and moving targets were used for target practise by aircraft.

The original site of Loch Doon castle was flooded for a hydro-electric scheme and the level of the loch raised in the 1930’s. The castle now sits on a rock above the road a hundred yards from a nice coffee shop where I stopped for a cream tea in the sunshine.

I understood the castle was an octagen but an article by Heritage Scotland describes it as being eleven sided. No worries – I’m sure that won’t worry the many visitors to these parts. Loch Doon holds stocks of a rarity in Scotland – the artic char. Much to the consternation of the current management the fishing rights to Loch Doon were granted to the people of Dalmellington by a previous owner. As the right to fish for free also included the right to camp on the lochside I can understand their concerns as someone has to clean up after the ‘happy campers’ have departed. 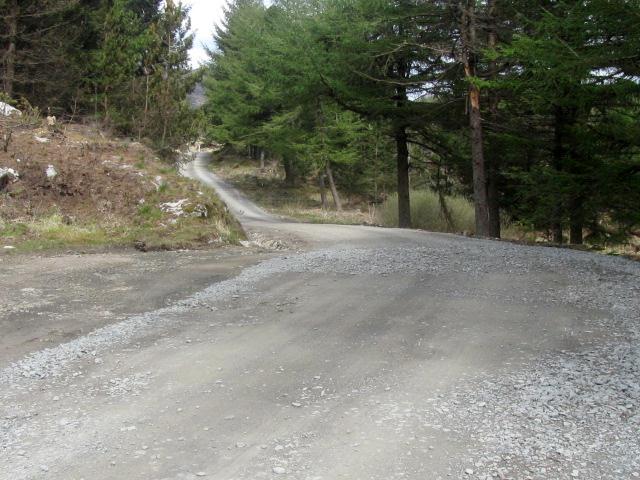 But we stayed sticky side down and enjoyed the experience —

A few miles of gravel strewn forestry track gave way to tarmac before Stinchar Falls and I found a new-to-me road that led over a high pass going west. On the forested side of the hill on my way up I spotted a big dog fox. He was reluctant to give way and even when I stopped hoping for a pic he wasn’t in a hurry to hide in the trees below the road —

I was soon over the top and just had to stop to take in the view! It doesn’t show in my pic but I could see all the way over to the mountains on the Isle of Arran and beyond to the Mull of Kintyre —

Prior to that I had glimpsed what I took to be the snow covered hills of Arrochar from my vantage point on the Galloway Hills. 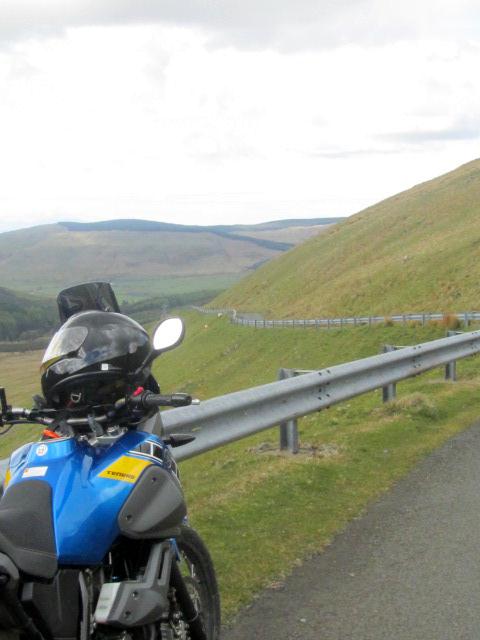 Once I got down into the valley an open gate invited me to follow an eight mile cycle track only to find that the gate at the other end was locked and I had to retrace my route. No hardship because by this time the dirt roads winding through the thick forests were more to my liking. Then it was back up over the hill where the lamb had joined it’s mates and hopefully the big fox would go hungry tonight.

From there it was a crackin ride down off the hills on single tracks to Glen Trool where I joined the main road to Newton Stewart and home on the A75. A hundred miles for the day and lots of fuel left in my tank at the end of it. My ride was something different – I wouldn’t want to do it every day but once in a while I like a challenge 🙂