That sunshine is still dragging me out and about. Today it was the RSPB reserve at Mersehead – about thirty miles along the Solway coast. My favourite part is the western end where in past years thousands of oyster catchers have gathered by the mouth of a small river that runs into the Solway Firth here.

I recollect reading somewhere that the manager had moved to another reserve and I formed the impression today that he had taken his birds with him. The feeders outside the cottage window were always a major attraction even when the rest of the reserve was quiet. But not today – instead of the dozens of small birds which are usually busy around the feeders there was only a handful. The lack of feed put out for them may have something to do with it. There’s obviously a change in working practices and the majority of the wee birds have gone elsewhere.

where an old tree trunk makes a good picnic spot —

Where I took time out to track and photograph a roe deer hidden amongst the trees. She is in the centre of the pic – standing just beyond the water — 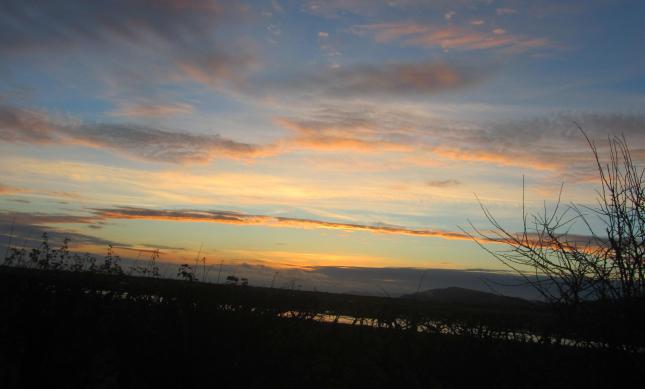