After the tailend of Hurricane Katia had blown through last weekend leaving a trail of devastation amongst the fully foliaged trees, big G was certainly in his heaven today. Blue skies from daybreak augured well and I had my chores done and ready for the road by twelve noon.

Dry roads and sunshine – perfect! My first stop was around the fifty mile mark at Seven Mile Beach by Sandhead —

The beach swings all the way round the top of Luce Bay, most of it designated Military Area and Luce Bay itself is marked as a Bombing Range on my Ordinance Survey map. There was no military activity but I wasn’t tempted to go for a swim and soon had the helmet on and back on  the road again. The approach to the picturesque small town of Drummore was my next port of call — 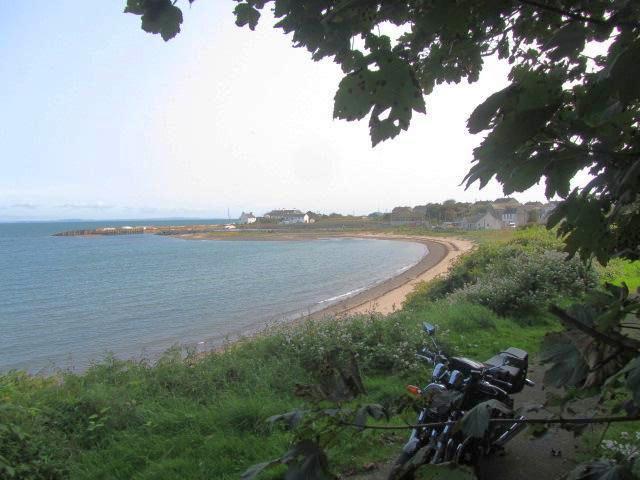 I was ready for a coffee by this time and tried the local cafe which had a few enduro bikes spread about the place. The Wild-West theme above the door certainly suited my image of Drummore but the coffee was good and the lemon merangue came real cheap. The biker girl who owns the joint rides a CBR400 and collects Speedway trivia – programmes and suchlike. 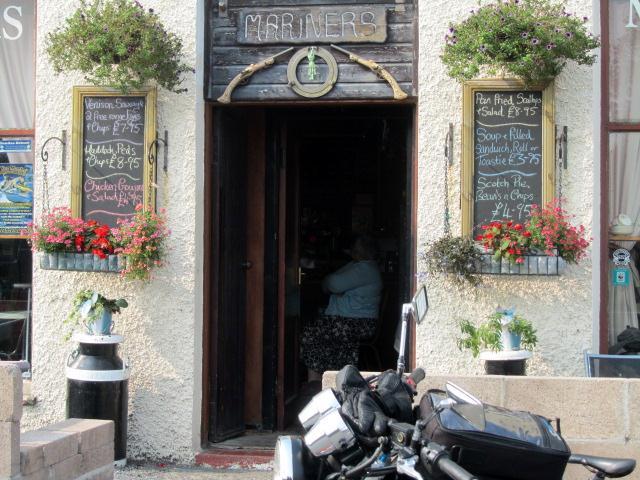 I happened to set the lamp swingin as I tend to do on such occasions and reminisced about having seen the Templeton brothers, Dougie and Willie sliding round the shale oval at Meadowbank Stadium in Edinburgh back in the sixties. Would you believe it! Biker girl had a Match Programme there on the table from 1966 with the Templeton boys figuring in it!

Coffee downed and biking yarns exchanged it was time to mount up the old XJR and head outta town.

Okay – next stop was the Mull of Galloway lighthouse —

Best thing to do is to head on down to the most southerly point in Scotland and see it for yourself. The Gaillie Craig visitor centre at the Point will be open till end October with limited opening in November and February. Closed December and January.

One thing that never closes is the RSPB managed Mull of Galloway Nature reserve which goes all the way out to the cliffs at the point. It’s a perfect place to view the seabird spectacle with more than 3,500 pairs breeding in the area. Perhaps by Oct/Nov I’ll be tempted to head back down in the car but today was made for motorcycling.

There are a few pics lost all together but the bulk of it is there so that’s another Post saved after my fiasco with the photo gallery. Sorry about the ads that WordPress tag onto all my posts but it would cost me thirty bucks per year to employ a gateman to keep ’em out. 🙂

Posted by Don on January 27, 2013 in Uncategorized