RSS
← Tenere does Gatehouse of Fleet
Across Loch Ken – on Foot →

Of Those Who Served

Most of us who have travelled in northern France and Belgium will have seen the many thousands of white crosses and the well tended graves for those who fought and died in the 1914-18 war. But not all who served died. A few – too few – survived.

Born 1893 at Kirkcudbright, the third son of Mr and Mrs Adam Garmory, nee Mary McGuffog, 61 Millburn Street, Kirkcudbright. Tom was taken to his first day at Church School, Kirkcudbright, 16th August 1897 by his father Adam, a local Roadman. On completion of his schooldays Tom served his apprenticeship as a grocer with Mr Ebeneezer Dalziel, 28-30 Castle Street and worked in Troon for a spell before answering the call to arms for the 1914-18 War.

Tom enlisted on 2nd June 1915 as Private 2985 with the 17th Highland Light Infantry (D Company). He landed in France in November 1915 and was wounded in action on 1st July 1916, the opening day of the Battle of the Somme. After recovering from his wounds he transferred to the 8th York & Lancaster Regiment and was promoted to Sergeant No 34834. Tom went on to serve on the Eastern and Western Fronts (Somme, Ypres and Italian Offensive).

In 1918 Tom was awarded the Distinguished Conduct Medal for Conspicuous Gallantry in the North Italian Offensive.

“For a long period during operations Tom was responsible for guiding ration parties to their destination each night, and in spite of very heavy hostile shelling, he succeeded in getting all rations and stores through. On many occasions he went out alone to find lost parties, and always showed a complete disregard of personal danger”.

“At Kirkcudbright Town Council Meeting – Sgt. Thomas Garmory, 3rd son of Adam Garmory was Honoured as Burgess of the Royal Burgh in honour of his record of distinguished and valorous conduct for which he received the DCM)” .

“He has shown himself to be a magnificent type of the young manhood of our country”.

Sergeant Garmory thanked and responded, “Similar action was done by hundreds every day during the war”.

“31st December 1924, Thomas Garmory  Millburn Street, was granted the Freedom of the Borough of Kirkcudbright and a Gold Medal from the Council of Troon”.

Thanks are due to the Sons of Galloway for general wartime information – to family members Tom H Garmory, artist of Keeston, Pembrokeshire, Dr Kay Chadwick, Lecturer in French Language at Liverpool University and to Jeannette Millar, nee Garmory, Castle St. Kirkcudbright for help with my research.

William was called up for service in 1917 and served on the Western Front with the Royal Scots Fusiliers. He received a shrapnel wound to his leg in July 1918. He recalled that he hadn’t realised he had been hit till he looked down and saw blood pouring over his puttee. He sought permission to report to a Field Dressing Station but felt faint and ended up crawling through a field strewn with bodies. He said that he couldn’t tell if the bodies were British or German. Eventually Tom passed out and when he regained consciousness he was in a South African dug-out and they were giving him a cup of tea. Some pieces of shrapnel were to remain in his leg for the rest of his life.

Bessie volunteered for hospital service shortly after the outbreak of war and served at Old Mill Hospital, Aberdeen, before transferring to the 58th (Scottish) General Hospital at St. Omer, France. She was Mentioned in Despatches for her work. Bessie was killed by an enemy aircraft bombing raid on 30th September 1917. She is buried in Longuenesse (St. Omer) Souvenir Cemetery, plot VI.B.2 and commemorated on Creetown War Memorial.

Proudly we laud the deeds of sons so gallant,
Bearing aloft the banner of the free,
Yet must our tongues but weakly falter
When we would seek fit words to speak of thee.

Bravely as e’er went warrior to Valhalla,
Nobly the cross you bore upon your breast,
Faithfull “The Lady of the Lamp” you followed,
Supreme in sacrifice with martyred Joan you rest.

Sweet be thy sleep, dear Sister of Mercy,
Calm thy repose where so lowly you lie,
Bright is the halo around thee forever,
Thou art of the dead who never can die

Lines were dedicated to Bessie Thomson by John Barra, Creetown. 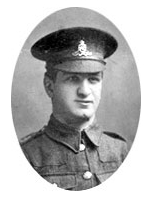 John Thomson Gordon was born in 1894 at Kirkcudbright, son of James Rae and Janet B. Gordon. John was employed in the Sheriff-Clerk’s office with his brother-in-law, Mr H Livingston, sheriff-clerk depute.

John enlisted as Driver 4262 with the Kirkcudbrightshire Battery of the Royal Field Artillery just prior to its mobilisation on 5th August 1914. He proceeded with this unit, part of the 2nd Lowland Brigade, 52nd Division, to Egypt, landing at Port Said on 20th June 1915. He took part in the operations in Egypt and Palestine, and was latterly attached to Headquarters Staff, 7th Indian Division.

Mrs Gordon received a telegram on 14th November 1918 stating that her son was dangerously ill from malaria, this being followed on the 20th by news of his death from pneumonia. John is buried in Alexandria (Hadra) War Memorial Cemetery, Grave C. 261 and is commemorated on Kirkcudbright War Memorial. His three brothers served and returned, James (KOSB) and Alexander (RFA) on the Western Front and George (Royal Engineers) in Egypt. 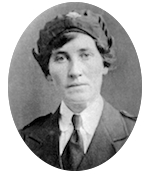 Margaret was a member of the Voluntary Aid Detachment and saw service in France from 30 May 1916 to 23 Jan 1919. Few details of her service have survived but it is known that she served in a hospital in Rouen. Margaret was Mentioned in Despatches by Field Marshal Sir Douglas Haig, dated 8 Nov 1918 ‘for gallant and distinguished services in the Field’.

While serving with the VAD in France, Margaret worked with Helen Tudhope. This led to her meeting Helen’s brother, William, the Director of Agriculture on the Gold Coast (now Ghana). Margaret married William Steel Dykes Tudhope on 7 Nov 1919, at Priestlands, Dumfries.

← Tenere does Gatehouse of Fleet
Across Loch Ken – on Foot →