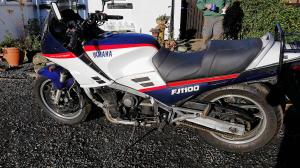 The FJ1100 was a short-lived sensation when introduced by Yamaha back in 1984. Not for the first or the last time Mr Yam was caught with his pants down when his very nice air cooled four cylinder machine was quickly overtaken by more modern oil and water cooled fours from the Suzuki and Kawasaki stables.

But that was back then. Believe it or not even now – thirty years later  – that air cooled four cylinder motor is still produced and sold in the current XJR1300 roadster where it has a strong following amongst knowledgeable bikers.

‘So where am I going with this?’

Deep in a Dumfries and Galloway forest where the current owner and his dog appear to be decidedly unimpressed with my starting offer for the FJ1100 which he has up for sale.