Twenty years ago I toured Green Spain with my partner on a BMW 1100GS – her first tour on a motorcycle. The plan was to ride anti-clockwise all round the Iberian Peninsula. This is the story of our trip – it turned out to be a much better experience than it reads.

I made the mistake initially of trying to cover big mileages most days. Difficult back then when the main roads wound around every cove and headland along that northern coast. Ok for the rider but not fair on the inexperienced pillion.

The month long trip started in Srathcarron in the north-west of Scotland and our route took us south to Portsmouth to catch a ferry over to Le Havre on the north coast of France – possibly Normandy. I don’t do main toll roads on a bike if I can help it and found some ‘interesting’ roads from Le Havre down to La Rochelle and it’s beautiful sand dunes on the Bay of Biscay. 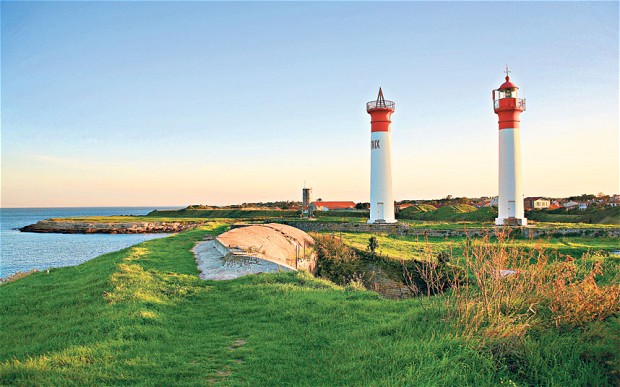 We didn’t hang around in busy but expensive La Rochelle and found a small, off-the-beaten track town further south for our first night in France. We had to travel a few miles out of town for our evening meal – it proved ‘interesting’. Some unfortunate animal’s intestines stuffed with unmentionables in a sort of watery gravy with a couple of veg. Last time I had something similar was in a Mexican restaurant in Kuala Lumpur and I didn’t enjoy it then either! I thought perhaps they had forgotten to cook the meal as most of it was pretty raw! Is that what they mean by ‘al dente’ 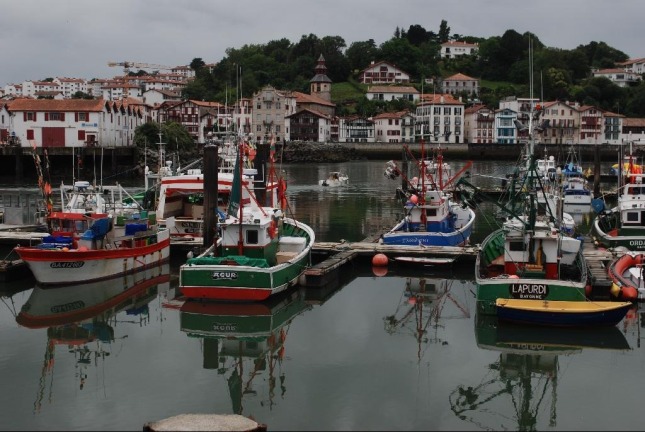 No worries! I knew of a beautiful town on the coast a few kilometres south of Biarritz and was sure that a relaxed lunch the following day at a pavement table by the harbour would soon have my partner smiling again. Unfortunately my response to an unforseen incident involving a favourite crash helmet that had it bouncing along the hard ground at a service stop en-route didn’t go down well and even the beautiful charms of St Jean de Luc were wasted.

Nothing else for it – get back on the bike and open the throttle. Soon we were across the border into Spain past Donostia-San Sebastian – past Bilbao to overnight at a roadside guesthouse near Laredo. Food was basic and our room was – – – just a room.

Time to make the trip more interesting. Being a ‘World Traveller’ I ‘knew’ that there was more fun to be had on the back roads away from the tourist areas on the coast. Perhaps for me – but not for my partner. She was still happy to regard herself as a tourist. 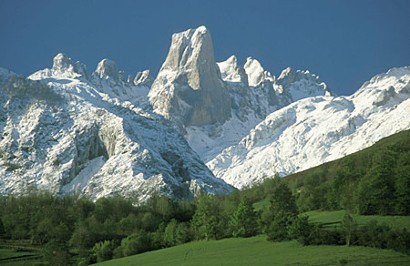 Another downside of cutting away from the coast were the mountains. The Picos de Europa really are mountains and mountains inevitably mean rain in late September – and rain it did.

My decision to have a small brandy with my after lunch coffee to keep in step with the truckers in that roadside cafe didn’t go down well either.

If the passenger is in a bit of a mood when he or particularly she puts her helmet on then that mood is likely to be much worse when the helmet is removed a couple of hours later!

If I’d known there was an airport near Santander I would have been pleased to go there and buy her a ticket – to – anywhere!

We discussed the trip when we got round to talking – much – much later – only to discover we had both been of the same mind. 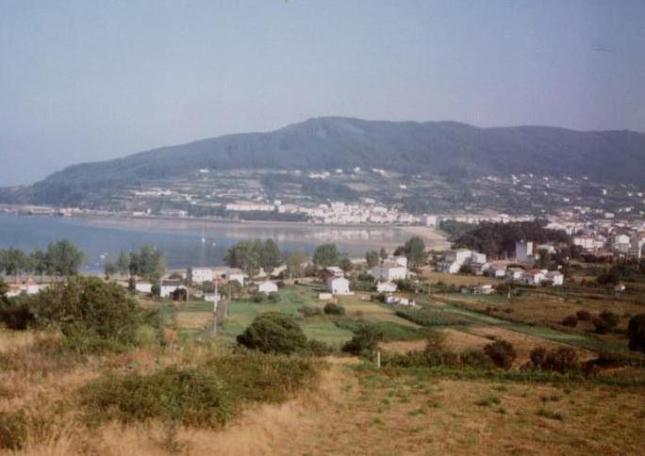 Night saw us back on the coast in the picturesqe San Vincente de la Barquera. Not very big but nice. Spanish seaside landladies don’t mess about and have voices that could strip varnish at fifty paces. We stopped in the town centre. Within minutes we were involved in a tug-of-war between two drama queens fighting over who would have the bikers to stay!

While this was going on a little Spanish guy whispered to me ‘try there’ – or words to that effect – pointing at the town centre church like building right beside us.

It reminded me of a mini version of Lluc Monastry in the mountains of north-west Mallorca where I had enjoyed a stay while on a walking holiday and I thought a few quiet monks for company might be preferable to the saw-toothed landladies who were still giving it verbals.

The room proved to be clean if basic and best of all we were allowed to wrestle the big GS through the heavy oak doors and park her safely at the bottom of the stairs. I will say that all this was conducted using hand signals and grunts as my knowledge of Spanish hasn’t gone any further than a very poor ‘dos cafe con leche’.

I could see that my reputation as a seasoned World Traveller was going downhill in my partner’s estimation. The monks had obviously had enough of the competition too as they appeared to have moved on. 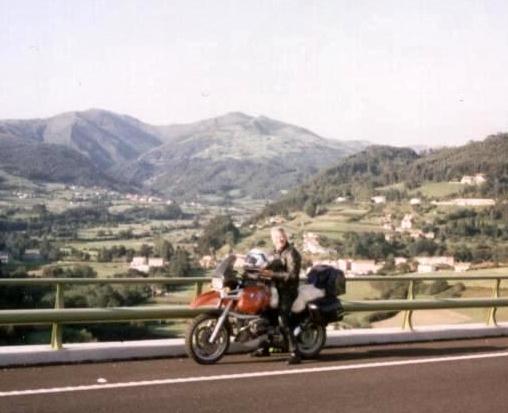 Onwards meant westwards and we lost a bit of time in Gijon while I found a BMW motorcycle dealer who replaced my speedo cable under warranty on the GS. The tyre fitter in Dundee hadn’t located the drive properly when I bought the pimply new tyres prior to our trip.  The result was that the inadvertent wheelie off the rough unloading ramp from the ferry in Le Havre stretched and broke the cable. Great service in Gijon BMW and all for free!

Cudillero was the next town along the coast followed by Luarca about forty kilometres later. We were to stop for a few nights in Luarca. The first night in a room with no windows. I think it was a converted garage but we found somewhere more suitable next day.

We visited nearby Cudillero. It was Fiesta time — 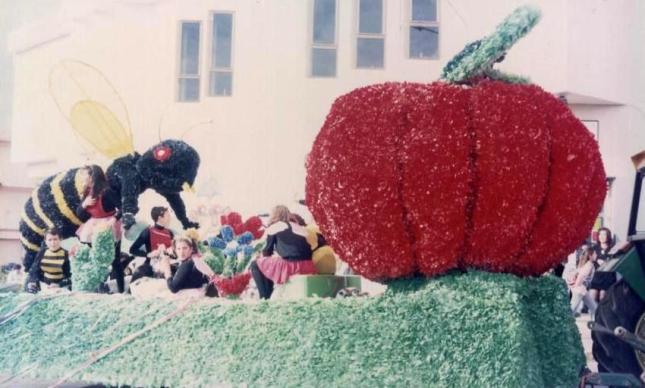 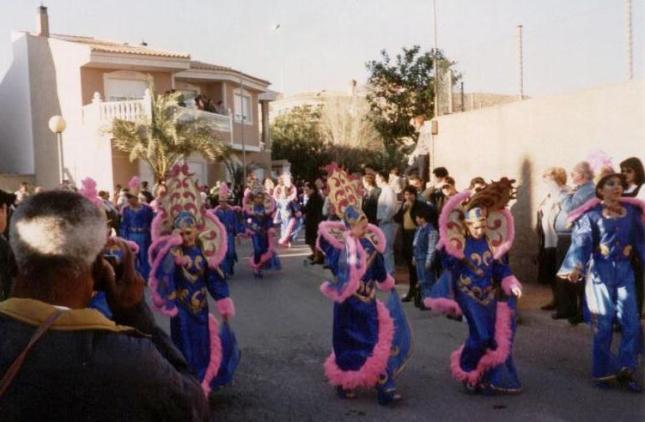 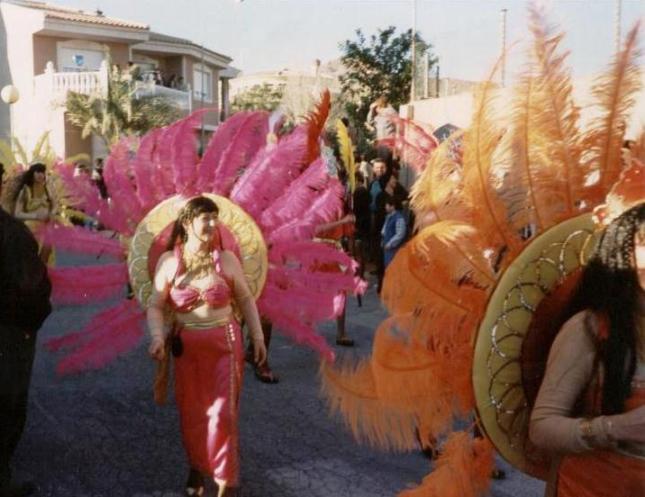 We like to think the Scots invented the bagpipes – so-o wrong! 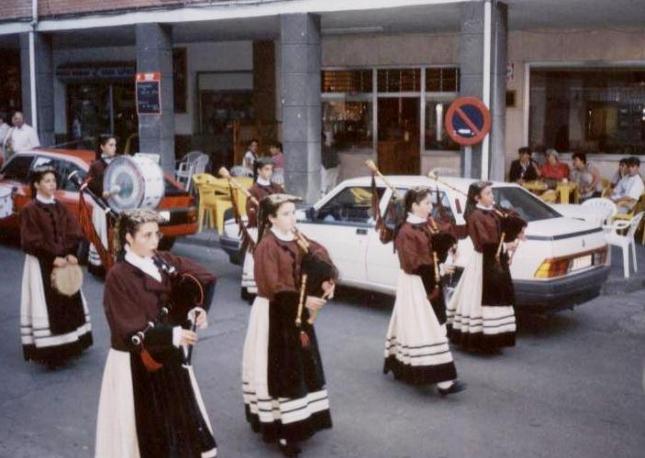 A Coruna was the next major city followed about one hundred kilometres later by Cape Fisterro – the most westerly point of Spain.

I put my shirt back on and we headed for Santiago de Compostela – the end of the Pilgrims Trail that people walk every year from somewhere in France – probably Lourdes. The Spanish beds were taking their toll on my back by this time and we found a small town on the coast to rest up for a couple of days. 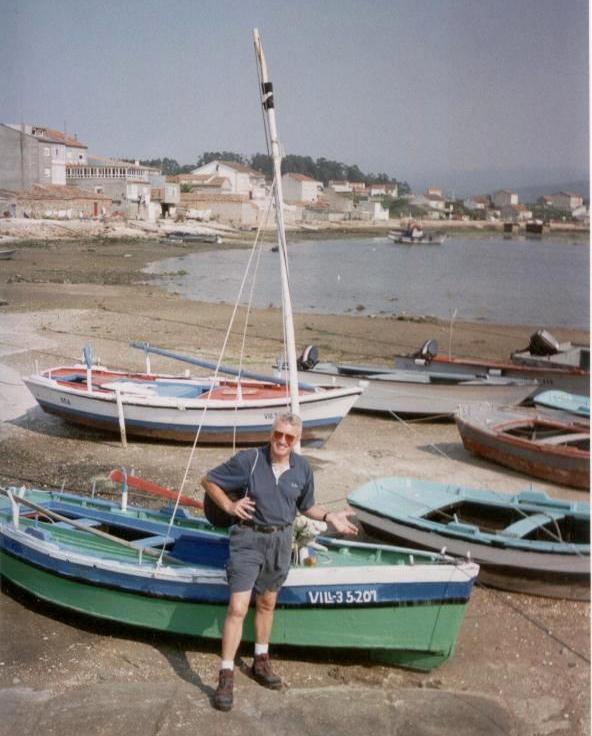 Two more nights in a bed with a big dip in the middle only made my back worse so it was back on the road into the teeth of a howling gale coming off the Atlantic! The bike had to be leant into the wind at what felt like forty-five degrees! If a truck acted as a windbreak while we were overtaking we would shoot sideways in the sudden lull!

‘Sudden lull’? Can you have a sudden lull? Well we did! Lots of ’em! There’s a whole lot of trucks on that road!

After struggling with the gale force wind for many miles we turned and ran east with it at our backs all the way to Verin near the border with Portugal. First night there coincided with another fiesta. There were lots of free activities and attractions in the town square so we found a pavement table outside a bar and settled down

It was all too easy! No sooner were we finished one San Miguel than another cold one was handed out the window which was in-line with our table and the bar inside! At the end of the night when we tried to settle up no one would accept any money. It took the ‘fair one’ three days to recover from alcohol poisoning! She barely left her bed in all that time!

One fine day we mounted up and headed south into Portugal — 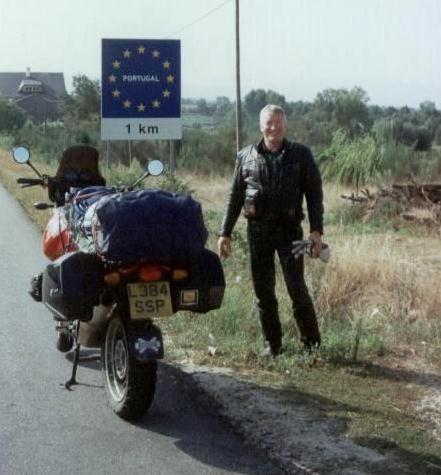 I was loving Portugal! Roads winding round, up and over hills covered with chestnut trees. Small farms. My kinda country. We found ourselves in Braganca – a busy small town about as far north and east as you can get in Portugal without being back in Spain.

The ‘fair one’ didn’t seem too impressed with Portugal. Perhaps it was when I gave the dog in a roadhouse a slice of ham from my sandwich and the brute spat it back onto the floor!

Time for a conflab! Things weren’t going too well! It was decided that we would head back to Luarca on the Spanish north coast and chill out for a week. No problemo. I set my mental compass for north and headed that way. It turned out there were beautiful lakes – roasting hot desert like areas where the locals lived underground in the summer and fierce mountains with ski-lifts for the winter visitors. I loved it but I wasn’t allowed to do it twice.

An overnight stop by the lakes of Sanabria had us ready for the tough stuff and it was hard going up over the mountains and through that desert. There was even coal being mined on one drab hillside and we were soon black with the slime off the wet roads at that stage making Luarca a welcome sight when we reached there after spending a night in a university town on the way. Whatever mileage you think you can do in a day it is better to half it over the winding roads of Green Spain. Especially two up with luggage! 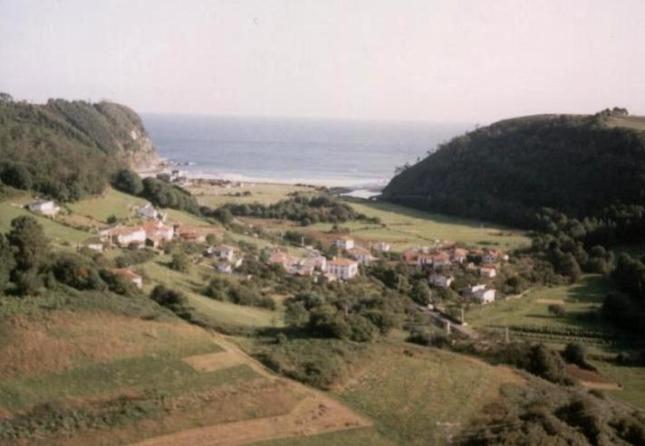 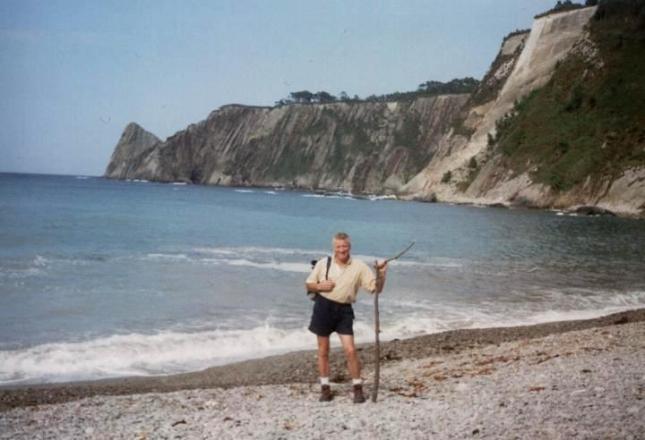 Posted by Don on March 1, 2015 in Uncategorized