There is probably something for everyone at the Scottish Motorcycle Show taking place at Ingliston Show Ground alongside Edinburgh Airport this weekend..

There’s the noise of angry engines coming from the skidpan or whatever it is where the stuntmen operate just inside the main gate.

Hard to tell. Tall as I am it’s impossible to get a view over the crowds gathered out there despite the inclement weather.

Then there’s the main hall for dealers and more official offerings such as Carole Nash Insurance where I was pleased to find they have resurrected the ‘Rider’s Policy.’ It was such a boon to those with more than one bike when Norwich Union offered it back in the day… 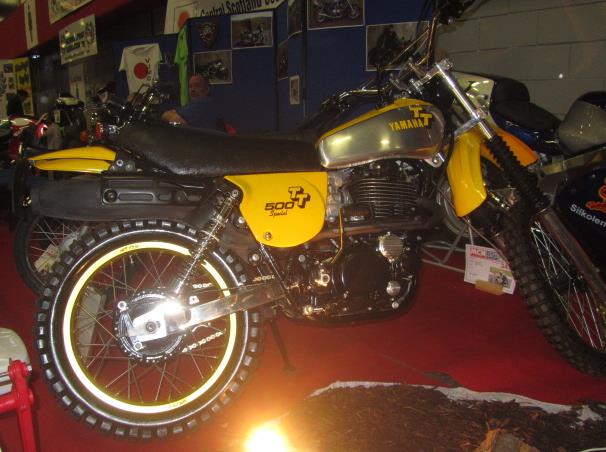 The proof will be in the pudding when I ring the Carole Nash office next week with hopes of registering my bunch of bikes with them.

Lastly – unless I missed something – there’s the quiet of the Classic Bike hall with it’s club stands – one make Owner’s Groups and everything from vintage to modern modified bikes on display.

That’s where I stumbled across the Scottish Pan European Owner’s Club stand and after sampling a ‘welcome’ pancake and home made jam with free coffee there was nothing else for it but to Join Up!

So we are now official Pan’s Pipers 🙂

Yes I know – my post is covered with pics from the show of one of the nicest looking bikes I’ve ever owned. The Yamaha XT500 as it was marketed in the UK back in the seventies – and the more off-road orientated TT version which was sold Stateside.

There were four fine examples of the bike on display and if I ever do get my FJ1100 back together and out the door this year – it could well be an XT of some kind that takes it’s place.

Posted by Don on March 7, 2015 in Uncategorized