In my previous post ‘ chasin the booty’ I had been looking at the latest Triumph Bonneville Speed Twin in the hope that I could find one motorcycle that would take the place of the mixture of bikes that I have in the shed at the moment.

Not that I’m particularly bothered about having more than one bike – if I had taken notice everytime the un-anointed said to me over the years – ‘ you can only ride one bike at a time’ – I might have retired rich if unfulfilled.

MCN testers like the new 900cc Bonneville but it doesn’t cut the mustard with me. The hard seat for the rider is a non-starter with my poor posterior and the pillion perch must be a joke. No doubt there is a proper seat somewhere in the long list of extras. Minimalistic fittings on bikes are ok in some areas but not where my ‘contact patch’ is concerned. 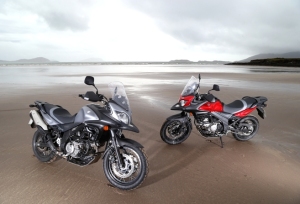 I did like the look of the XT version of the new 650 Suzuki V-Strom at the other end of the showroom and thought the broad but firm dual seat with decent provision for a pillion might be an improvement over the Speed Twin where comfort is concerned.

The central flanged – spoked DID rims allowing fitment of tubeless tyres was another step in the right direction in my book .

I already like that sweet 650 v-twin motor so it’s a no-brainer – clear everything out and go for the all-singing – all-dancing baby Strom — until I read the reviews on those lil suckers.

The seat may look the biz on the new V-Strom but the tester slates it for giving him a numb bum after a hundred miles. What chance have I got if these hard-assed Test Riders can’t even hack it?

No worries – bought new in 2009 the 660 Tenere XTZ is still in my stable. She spent a few years with me being hammered round Europe and looked just as good on the white sands of Tiree four years back as the V-Stroms did on a Lanzarote volcanic mud patch at the Press launch recently —

and – after the best part of a twelve month rest in the shed and a little fettling she performed better than her rider on today’s gallop – bringing him home safe – if not sound. 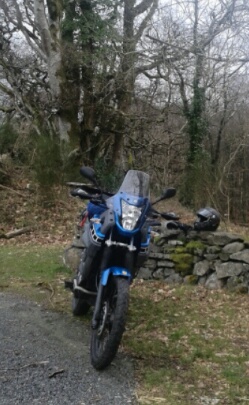 I guess the throbbing single in the Tall Ten will be with me for a while yet. She does most things well enough – doesn’t owe me anything after six years in my tender care – and – 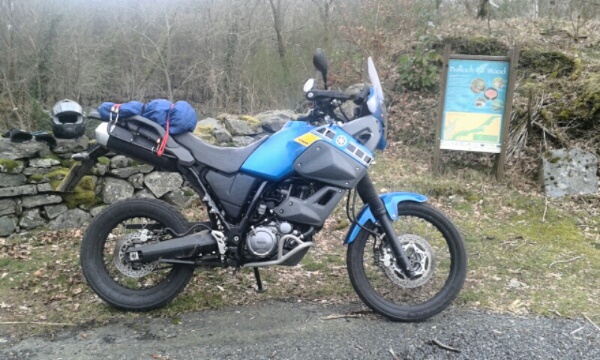 Posted by Don on March 3, 2016 in Uncategorized