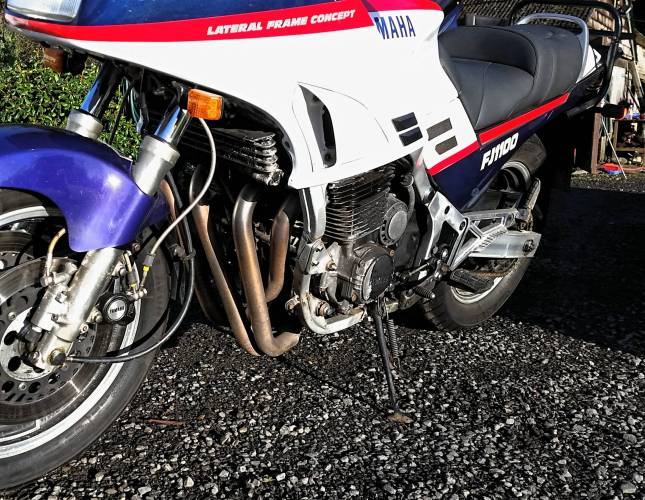 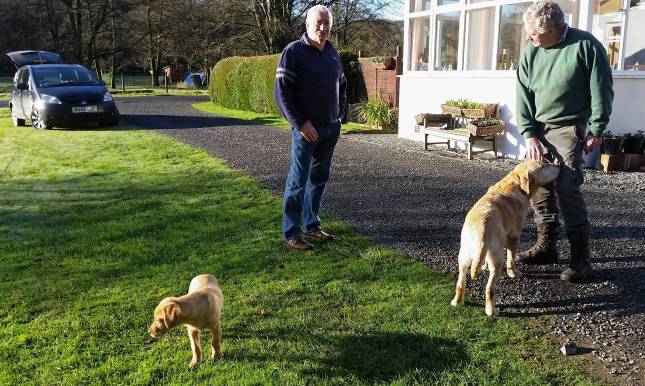 Wee Toby was the star turn – just a few weeks old and so full of fun and mischief. Here he is sloping off towards the forest in disgrace after getting a rollicking from his master for pulling old Bracken around by the ears 🙂

The FJ1100 was a short-lived sensation when introduced by Yamaha back in 1984. Not for the first or the last time Mr Yam was caught with his pants down when his very nice air cooled four cylinder machine was quickly overtaken by more modern oil and water cooled fours from the Suzuki and Kawasaki stables.

But that was back then. Believe it or not even now – thirty years later  – that air cooled four cylinder motor is still produced and sold in the current XJR1300 roadster where it has a strong following amongst knowledgeable bikers.

‘So where am I going with this?’ 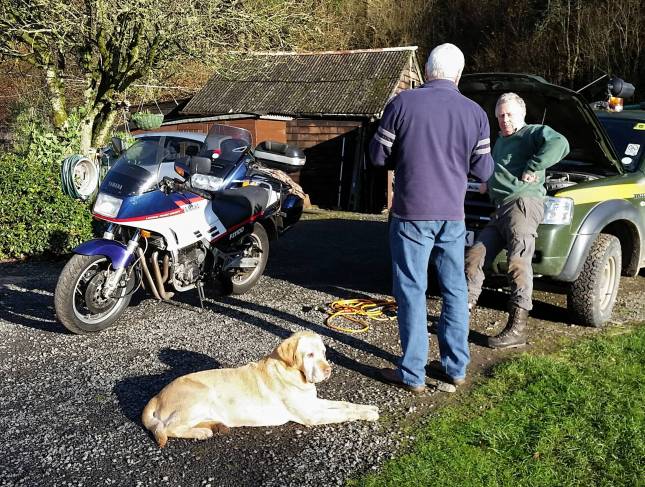 Deep in a Dumfries and Galloway forest where the current owner and his dog appear to be decidedly unimpressed with my starting offer for the FJ1100 which he has up for sale. 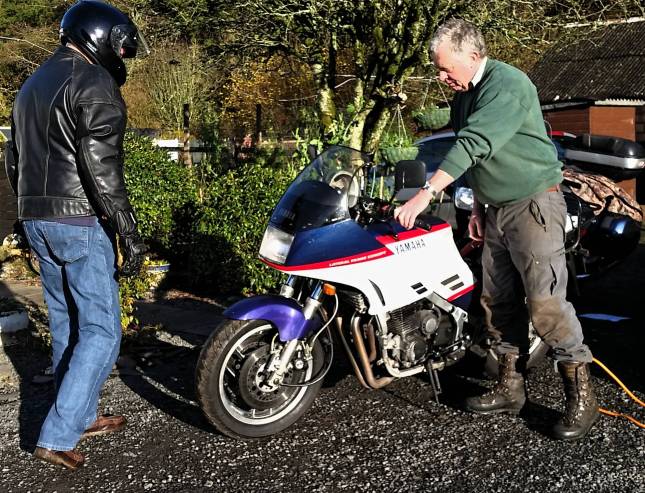 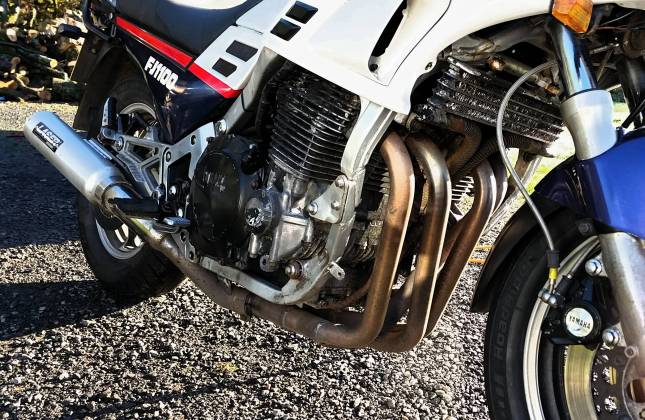 Corruption is everywhere these days and no more so than in the motorcycling field where the ubiquitous 36Y inlet rubbers fitted as standard on the FJ1100 are the ‘must have’ tuning accessories for the XJR1300.

The late arriving XJR uses the same motor but Mr Yamaha strangled the beast at birth when he specified a cumbersome exhaust system and matched it with 33mm inlet rubbers. 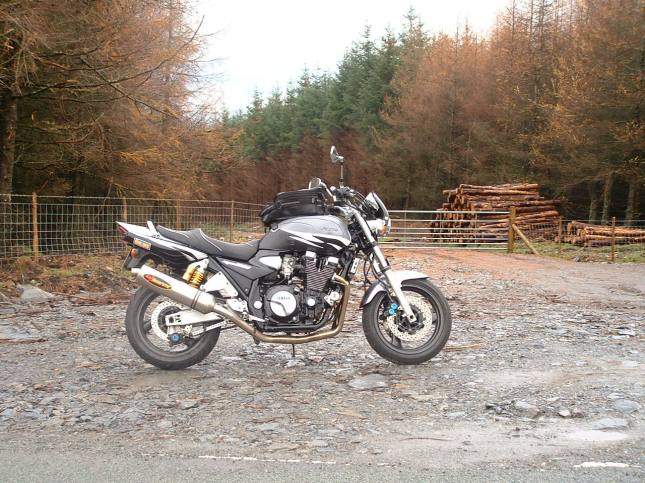 Fitting a free-breathing Akro like the one on my old bike above – plus a set of these 36mm inlet rubbers stolen from an FJ releases a few more ponies as well as lowering the all up weight by a worthwhile margin. 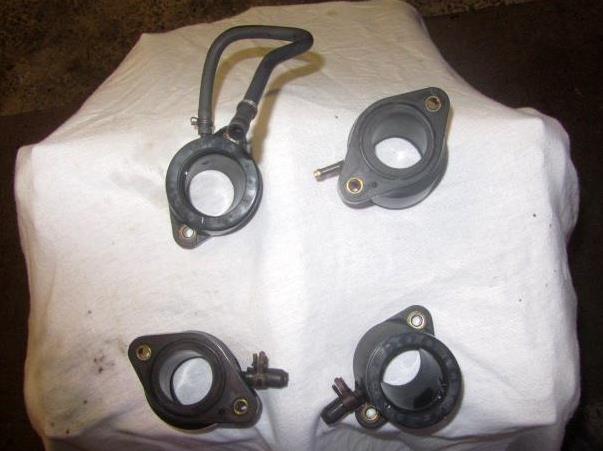 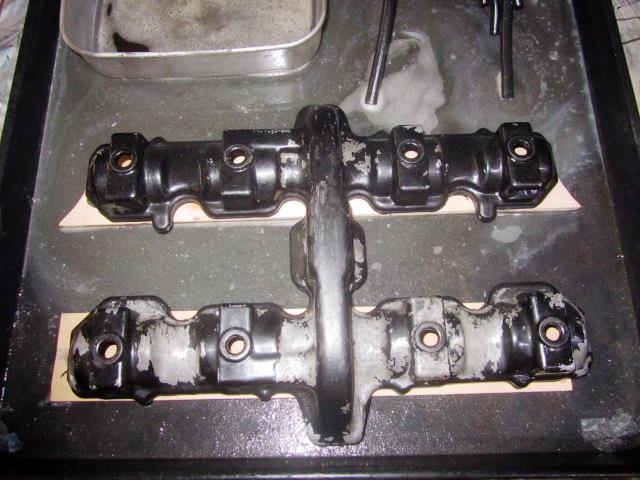 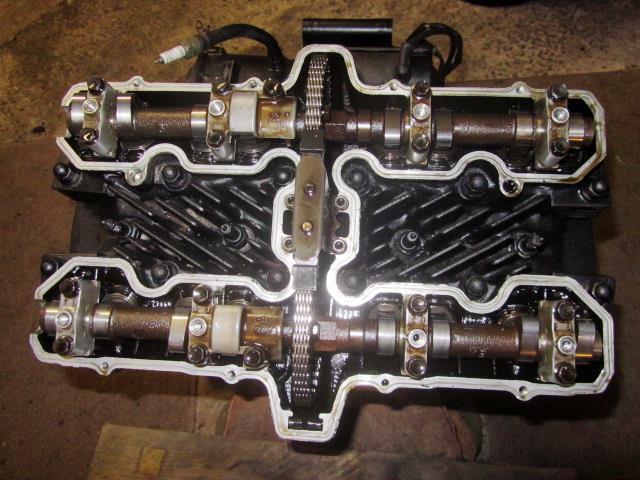 The carbs are coming along nicely – it’s just a case of deciding how far to go with them in house. Providing they are reasonably clean inside I won’t send them off for ultra-sonic cleaning as it’s my intention to keep the costs sensible —

A tidy bike – running like she should is my aim.

But I will have to wear my mask —

Hoping to bolt a few bits of the FJ together soon. 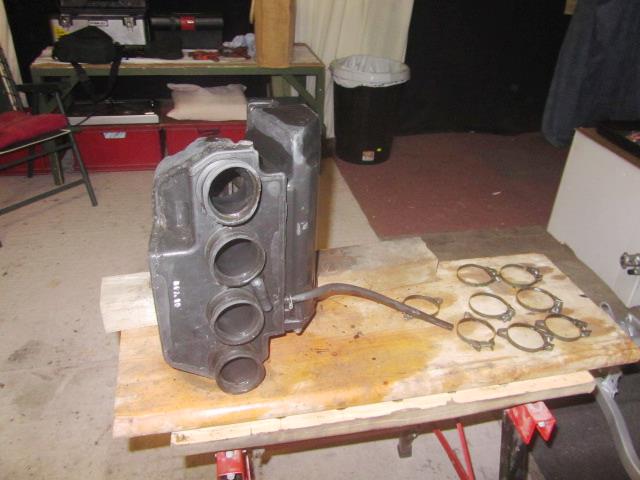 the carb heat shield which is hanging up to dry after de-greasing. A tidy up with my rubber mallet should see her shipshape again — 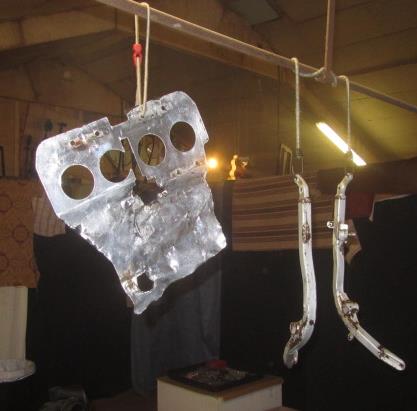 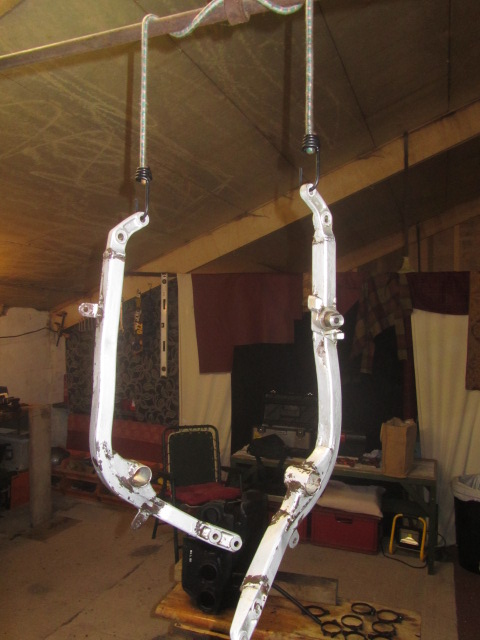 after I wrap the main frame around the motor.

Just to have something shiny to play with amongst all the muck I bought myself a treat off ebay.

A nice set of soft jaws for my vice. Invaluable when it comes to holding parts that are easily marked – firmly —

Rome wasn’t built in a day 🙂

The saga of my FJ refurb has reached the first milestone with the painting of the motor and upper frame virtually complete.

I have yet to decide what to do with the peely-wally rocker cover. I will probably go for a more attractive finish on it and the clutch cover – perhaps some type of plating to catch the eye — 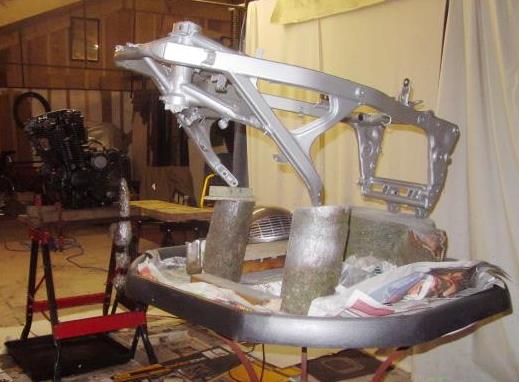 I checked the Ten out today and all she needed was a few psi in the tyres and she is ready to go.

Let’s hope the sun continues to shine on the righteous 🙂

while I tackled the frame —

The purists may shudder but with costs in mind this was never planned as a nut and bolt restoration – just a good clean then deal with the rusty bits before freshening the paintwork. I have never used Hammerite before and I hope I don’t live to regret my decision to use it on the frame — 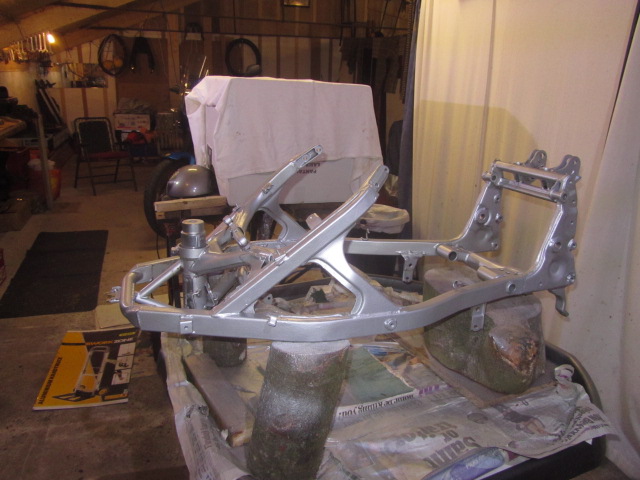 Time to take a break from painting — 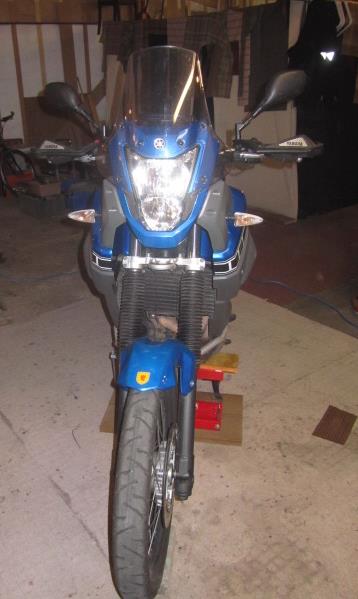 When I see her up there looking so good it’s all I can do to wait for spring before getting the maps out and heading off some where.

Come to think of it – I never did get to Corsica —

But there’s time yet 🙂

Paint it Black – or bits of it. Painting frightens me – one of the few things apart from snakes that does. Being colour blind doesn’t help and ruins the confidence.

No worries – even I can see this is BLACK —

or Satin Black to be more precise —

I played safe and started with the sump as it will be hidden by the plastic belly pan which should cover a multitude of sins. And if the belly pan doesn’t hide my mistakes – I’ll leave her in the box —

We’ve just had our coldest night of the year – eight degrees of frost. Luckily I stumbled over that cardboard box while rooting about in the dark next door this morning. Coupled with my electric fan heater it made a perfect auto-clave to warm the motor before painting and to cook the paint afterwards to help it cure — 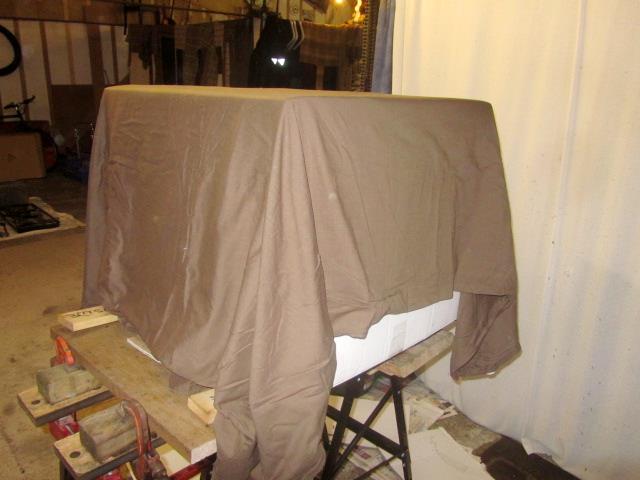 I even found an old duvet cover to help hold the heat in after switching the power off and heading home for the night. I will decide tomorrow in the cold light of day whether the runs are bad enough to make me start all over again 🙂

No doubt there will be a few expletives flying around before this refurb is done but I have n’t reached that stage yet. Nope – the blanks I’m referring to are to stop the ingress of degreaser, muck and whatever else is going during the cleaning and painting process.

Then it was the turn of the 36Y inlets — 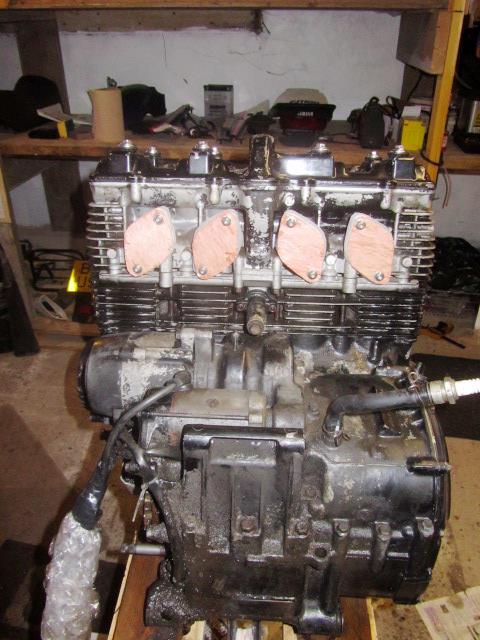 that won’t be difficult 🙂

But – today I had a willing helper. Not only does H make a better job of cleaning the frame than I do.

She takes clearer photos too —

Too good in fact. That frame doesn’t look quite so pristine in her pics – and the motor is showing every one of the five previous owners and thirty one years —

Where the stubborn cap screws fixing the lower oil cooler feed lines to the sump soon surrendered to a bit of heating and beating and unscrewed nicely without further drama.

First intentions were just to refresh the old FJ cosmetics and show her off at some of the local vintage events in the summer but once she’s stripped down it’s difficult not to go overboard and poke and prod even further.

FJ1100 Shiny Bits – I wish. There’s a long way to go but it’s early days but I have made a start and she’s coming along nicely — 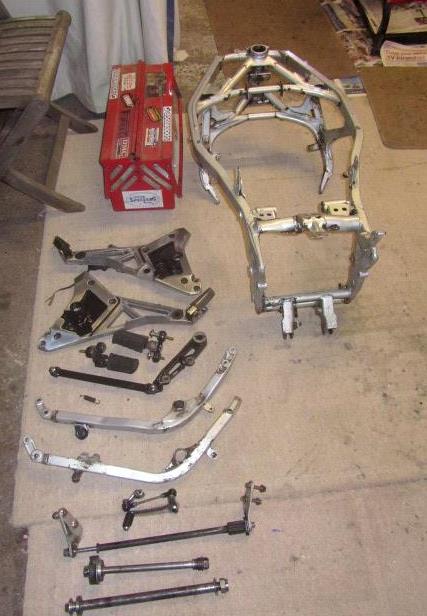 but not half as much as making that old motor look respectable. A previous owner has had a go at painting her and she’s neither one thing nor t’other —

The motor is original and looks rather sad but I’m sure I’ll find a way to spruce her up a bit. It can’t be that difficult —

I could hear lumps of ice rattling off the roof this afternoon but the FJ and I were as snug as a couple of bugs inside.

It’s nice to have a job to do under cover when the weather turns wicked even if it’s to do it twice as in the case of this rear shock.

I had already bolted it in place a few weeks ago after a cursory clean up. Out she came again to clean the flaking red paint from the spring and give her a fresh coat of black gloss. Then it was a case of greasing up the shock linkage before putting her all back together again.

That’s better – next to go in were the front forks —

The headstock on the FJ is so well braced – from memory the only bike I’ve worked on with this amount of metal around the headstock was an upmarket Bimota sports bike.

Even if it did come from a Hammerite aerosol can. 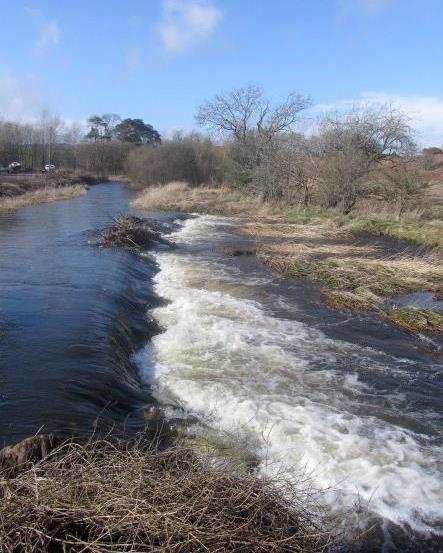 Winter will soon be over so I had better make a start to putting the FJ back together. With the heavy lump of a motor already sitting on wooden blocks mating the frame to the motor wasn’t too difficult.

Simply a case of laying the main frame over the top —

Lining up the bottom rails — 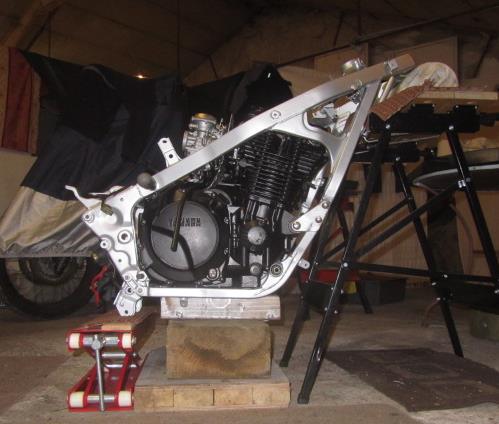 offering up the side plates —

and sticking a few bolts in.

FJ1100 Luing Scrambler? That’s the plan anyway. If Ducati – Triumph plus Uncle Tom Coblers and all can build a scrambler out of what is basically a road bike then surely I can build one too — 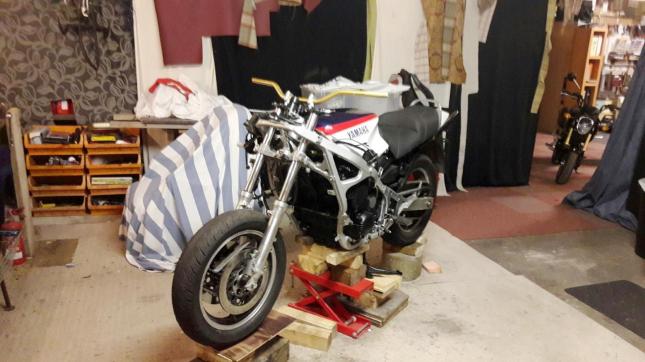 My MSX 125 runabout keeking through the curtains looks unimpressed – or does she? I reckon the little sweetie looks pretty scared as well she might once that 4cyl 1100cc beast comes back to life! Even the Tall Tenere who seldom backs off from a photo-shoot has taken to the shadows on this occasion —

My fault it’s running late really for I’ve prevaricated over the rebuild for almost a year since I got to the stage where I would have had to cover up all that lovely metal with her original plastics and couldn’t bring myself to do it.

Who is the Daddy 🙂

Thanks for ploughing through this marathon of a post folks — it’s a proper mish-mash consisting of the ten or eleven FJ related posts on here since i bought the bike around two years ago. I had little idea what I would do with the bike but at least I have an end product in sight now in THE Luing Scrambler.

Unfortunately the FJ and I are separated by 200 miles of road for the time being so it’s not as if I can nip out in the morning and bolt a few bits together.

No worries – I am more than hopeful that she will be housed by my front porch up here on Luing before Christmas. In the meantime I will try to bring some sort of order to this series of copied Posts in the hope that the FJ1100 Story will make more sense and with my fire rekindled perhaps I will now ‘horse on’ and complete the project.