Aird Luing – the high point on the southern end of the Isle of Luing – at a mere 65 metres it’s not particularly high but with sea in most directions the views are spectacular and the trail up and over is a class act.

Quite different from my Saturday ride on her down to the Green Welly at Tyndrum when I caned the lil beauty over the hundred miles or so there and back on the ‘big’ roads.

Having ‘obtained’ permission for this ride I didn’t want to blot my copybook by stampeding the famous Luing cattle that appeared to have laid claim to some of the track although many of the ‘flighty’ sheep scarpered no matter how quietly the jewel-like CRF 250 whispered past. 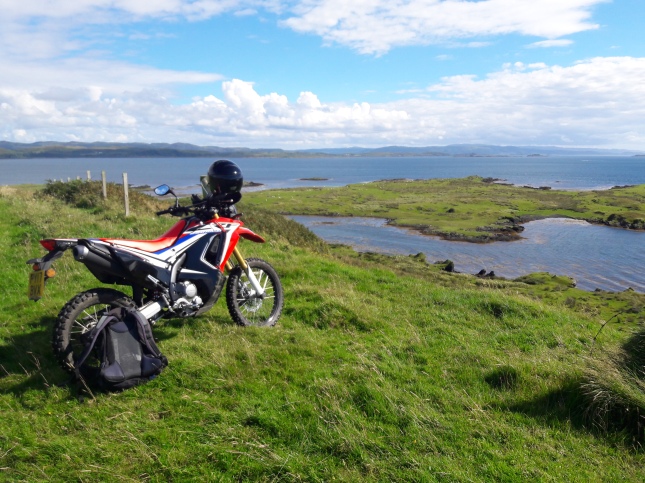 I guess it’s brightly coloured flanks were like something from outer space to a wooly-back on the bottom end of Luing.

And all too soon we were there —

having looked over to the dangerous Passage of the Grey Dogs twixt Scarba and Lunga and the wild Atlantic Ocean beyond on the way.

No danger on Luing – except from the Red mother cows –