The old girl sported a set of worn out Bridgestone tyres when she came into my hands a few years back.

With about 21000 miles of light use on the clock at around twenty years old they may well have been her original tyres – they certainly looked and felt as if they might be.

I’ve managed to put another 12000 miles on her since then without really going anywhere in particular – like a tour down to the Balkans or Spain and Portugal like I’ve done in former times. 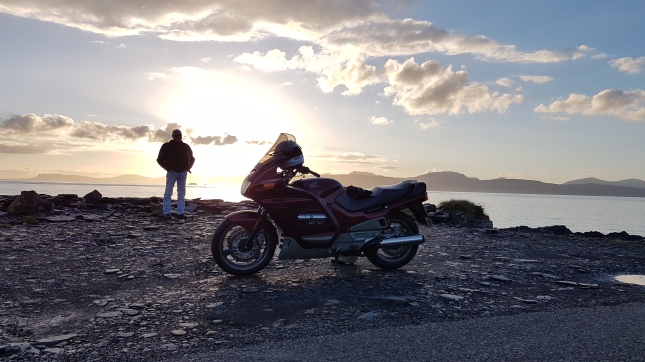 She is a heavy ol’ girl tipping the scales at around 340kgs and certainly feels it on worn tyres. Having a surplus of bikes at the moment she is in the forefront when I make my half-hearted attempts to sell one to help balance the books. So far I have been offered buttons for the ST1100. During my period of ownership she has had a new purpose-built Nitron rear shock shoved up her chuff – a new battery and two sets of Bridgestone tyres. In fact – make that three sets for last week she got a another set of Bridgestone BT03’s.

I bought the Pan in the first place for her comfy seat as after a series of op’s on the bit I sit on I needed some comfort in that department and despite it’s after-market gel pad and neat leather seat cover I still didn’t find the perch on my other bike – the Tenere easy to live with over a distance.

Saturday saw me heading for the supplying dealer on the 650 V-strom for her first service. She has proved to be a lovely bike in all departments but one – with a peach of a v-twin motor giving honest performance even at running-in revs.

If she has a fault it’s in the seat – it’s too low for 32-33ins inside legs and lacks support. The penchant these days is for low seat heights as the under-nourished – vertically challenged brigade have convinced the manufacturers they are losing sales by not catering for the short-arses amongst us.

My early morning rise on Saturday saw me catch the first ferry from the island at 7.30 and with a brief stop in Oban to garner funds at the hole-in-the-wall – a further stop in Callender for fuel plus a hot choc and to bring the circulation back into my lower limbs – I was  in Edinburgh booking the V-strom in for her first service by 10.30.

My legs may have recovered in the hour I spent at Saltire booking her in and enjoying a crackin bacon roll with added black pudding washed down with plenty of coffee but 615 miles in a week on the V-strom saddle had taken their toll. To think I have been known to do that mileage day after day on my trans-European rides not-so-long ago puts things into perspective. 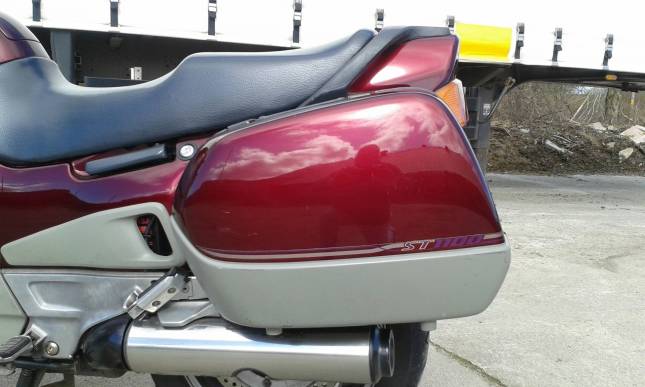 No worries – I left the Strom for her service and the fitting of some free extras that had formed part of the original deal then rode home on the big Honda – resplendant on her new ‘boots’. The Pan European ST1100 may be built like a bus but she does have the saving grace of that comfy seat 🙂