Just to say I’ve tried Facebook – gave it my best shot and find that I’m writing blogging style on there whereas the Facebook format is more suited one liners and faceless political arguments.

No worries – I still have three bikes – The Honda X-ADV750 – a Honda CRF250 Rally and my long term project Yamaha FJ1100. The current weather isn’t being too kind to us but I am still getting out and about as excercising the dog is allowed during the Lockdown.

I’m looking around here for a way to insert pics but things seem to have changed since I last posted.

OK – let’s see what happens when I click publish —-

I had no sooner bought the bike from Jim than he ‘borrowed’ it back to race at the NW200. 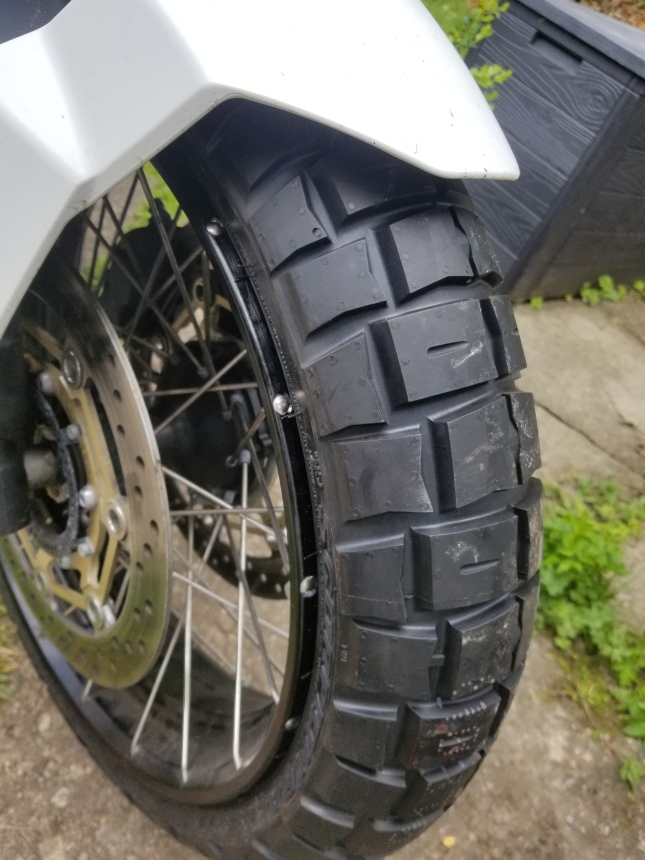 Looks like something you would find in a field or farmyard —

but works very well on the road — 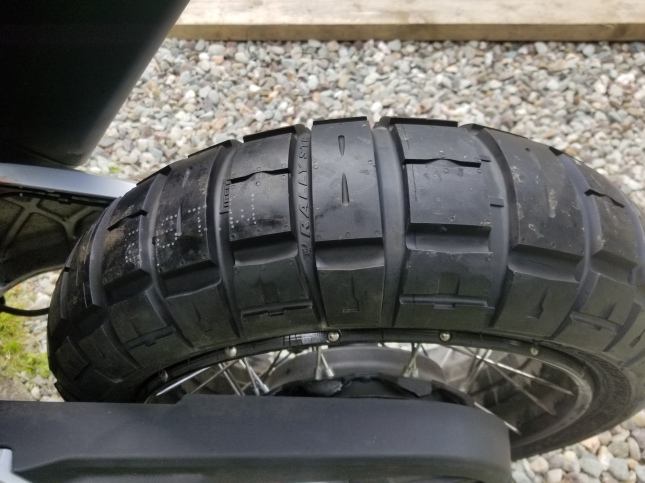 on my Big Scoot!

OK – so it doesn’t bear any resemblance to the bike I bought but after 12 happy months running on the road I took the angle grinder to her and produced what you see above.

Even the flywheel cover was chamfered in an attempt to stop it grounding during enthusiastic cornering and twenty mil shaved off the flywheel let her rev up somewhat quicker than standard and also made room for the chamfer.

The noisy exhaust was knocked together by a welder in Stirling and the expensive lightweight Italian wheels came from a race shop in London Road – Derby. The heavy chain and sprockets were also ditched in favour of race products and she ran on Pirellis.

Bodywork was from bits & pieces I had in the garage – nose fairing from a Honda VFR400 NC30 – tank cover and seat unit leftover from my Yamaha FZR600 which reminds me that I also gave the chop treatment to the fuel tank so that it would fit tidy between the frame rails.

An FZR1000 fuel pump ensured the coarsely jetted carbs got plenty of go-juice and apart from fitting a heap of lightweight bolts and braided brake lines that was about it.

In Scottish racing she had to compete in the Open Class against the 1000cc Exup’s and such like but in BoTT races down souff she was more competitive. I came up with the pink & purple colour scheme and Andy at Bike Paints did a real nice job of applying it.

Even now I think she is a great looking bike and certainly gave me a lot of fun.

Not bad for a first effort —

Givitsum was Born Here on First day of Spring 1942

For as long as I can remember I have wanted to return to my Place of Birth in wildest Aberdeenshire – Scotland.

Well two years ago – at Helen’s insistence we went off on the trail from our holiday base at the Grant Arms Wildlife Hotel in Granton-on Spey.

A chance encounter with a sprightly lady of 93 years young at an outlying farm helped us pinpoint the area for she remembered it well – having watched across the fields on getting home from a dance as a teenager – she had seen the old wartime wooden cottage burn down.

Thanks to the warmhearted Aberdeenshire country folk our search for a needle in a haystack turned out to be so much easier than we could ever have imagined.

Much has changed now – according to my big brother that place wasn’t much bigger than a henhouse and had grass growing up through the gaps in the shrunken floorboards. A fierce wind was piling snow up against the walls and doors and dad was off in North Africa fighting for his life and country. No wonder Mum spent her next couple of years seriously ill in an Aberdeen hospital while I was shipped around available family members.

so it was realy moving to visit mother’s family grave —

The Ducati Corsa 888 – a Blast From The Past

Yes I’ve had one of these proud fellas as well. The Italian Stallion from the early 1990’s.

Mine was the full race 956cc Corsa version. The last of the line – I bought it from Tony Jeffries. His son – the late great David Jeffries had raced it for the 1994 British Superbike series – the year before the game-changing Ducati 916 appeared on the scene.

She came with the full race pack – four or five sets of bodywork – half a dozen lightweight wheels – two motors and a whole heap of bits and pieces.

The whole package cost me the bulk of my settlement from a recent expensive divorce but it was money well spent in my opinion – at the time.

The new 916 arranged for a very young Neil Hodgson was late out of the blocks – still in the factory in fact.

Not the end of the world – for Neil rode my 956 Corsa instead – finishing 5th in the Battle of the Twins and a very creditable 12th in the Daytona 200 proper – his first international race on anything bigger than a 125,

With the benefit of hindsight would I change anything?

Not a bit of it! All costs had been paid – including flights for the team – hotels – air freight for my bike and entry fee – all done and dusted by the Race Organisers.

The icing on the cake was that on returning to the UK a buyer was found for my Ducati outfit at the same price I had shelled out for it only a few short months previous. A result!

Where else was I going to get that sort of experience – with a future World Champion at the start of his Superbike career – riding my bike in the Daytona 200.

It certainly helped me over the trauma and heartache that divorce can bring after 30 years of marriage. I could have been a sad fool and blown the lot in Vegas for I have little luck when it comes to cards.

Sunshine has been scarce around here since the Lockdown was lifted so we weren’t going to miss the chance of a dry ride down Glen Devon.

Helen! Where have you hidden that entry form?

It’s quite benign here on the lochside at a point where I would meet my biker mates from various parts of the country in days gone by.  Back then we had an old 5 gallon oil drum with a few airholes punched into it for a fire – hidden in the undergrowth during the week and magically found on a Sunday. We would burn either plentiful driftwood from the shore or forage for fallen branches in the forest.

Then the jackboot wearing Rangers took over and burning local wood was ‘verbotten’ – it was to be allowed to rot where it lay where it would provide homes for insects and suchlike. Very understandable sentiments as the start of the foodchain has to be protected and nourished for the good of all. 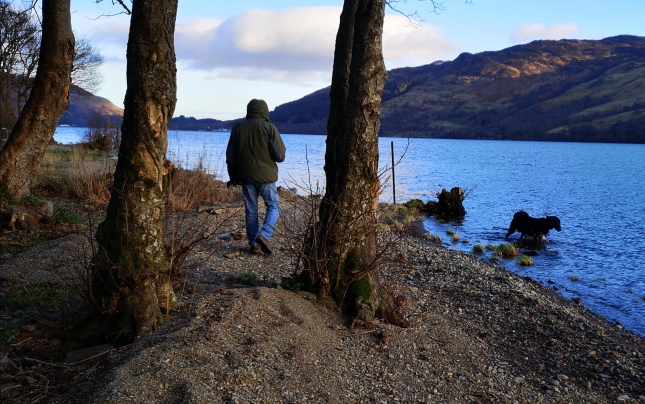 Better make the most of it while we can Loki – the fishing season will be starting soon and this shore will be so poluted with peepul and the filth they leave behind that you wouldn’t want to walk on it. The Rangers who moved on a few harmless bikers soon lost control when the multitudes arrived.

Well I wrote that back in February and found it in my Drafts. We’ve had a three month sabbatical for the Corvid 19 Lockdown but things are getting back to what passes for summer normal and I won’t be walking Loki on these again filthy shores before next winter rains wash them clean.

Not sure how this is going to work as Word Press have put me on their brand new editor .. little do they know I prefer the old style editor I started on here with all those years ago.

Nope! I give up! It’s impossible to write a flowing post with this cheapskate style junk!

Word Press – put me back on the old system please — givit!

OK – I’ve had a few hours sleep and I’m ready to try again. This new system is probably not all bad – but – why try to fix sumthin that ain’t broke!

See! It works ok – it was probably down to our crappy broadband service being overloaded by over-hormoned teenagers on TIK TOK that I struggled with the new fangled Editor at 9 o’clock last night.

and down to the gate —

using this new Editor is as easy as riding a bike —

Glen Quaich with H and the X-ADV750

It’s well through the month of June and I have just spotted my last Post. It’s dated 9th March and the first sentence is all about riding on a Sunday and how much better it feels than in the week. After three months of Lockdown every day has become a Sunday and days on the bike have been few and far between. 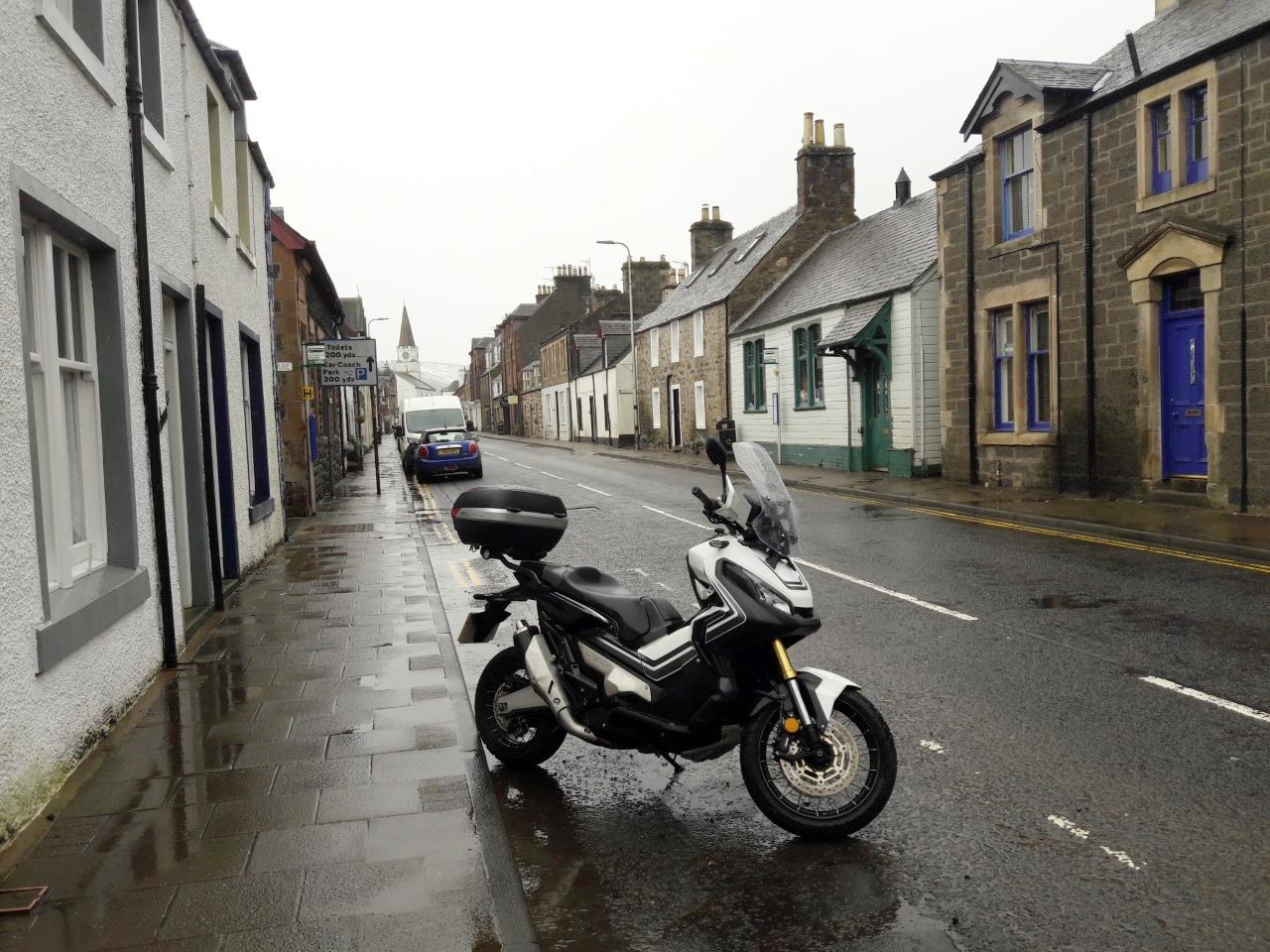 But – there was a Sunday – the Lockdown had eased slightly – time to ride – and ride we did. By Crieff then a left to the Sma’ Glen and left again into Glen Quaich as we entered Amulree.

Time to stop for a few pics before topping out the climb which had been made more interesting on a couple of steep – tight hairpins by my lack of faith in a clutchless bike.

No worries – the X-ADV made little of it and all I had to remember was to apply the hand-brake when parking on a slope.